Another loner, another show

Tom Cruise fights his way to justice as Jack Reacher. 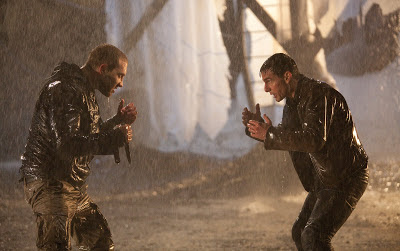 Somewhere along the line, it became mandatory for a certain kind of male hero to display as little emotion as possible, to become an icon of don't-mess-with-me toughness. As played by Tom Cruise, former soldier Jack Reacher -- the main character in a series of popular books by British novelist Lee Child and the title character in Cruise's new movie -- is one such man: decisive, physically fit, brutal when necessary and unencumbered by possessions. Reacher has only one shirt to his name, travels by bus and always seems to keep moving.

Jack Reacher, a new movie adapted from Child's 2005 novel, One Shot, takes place in in Pittsburgh and kicks off with a harrowing shooting. Positioned in a parking garage, a sniper picks off five people in what appear to be random acts of senseless murder.

The sniper (Joseph Sikora) is quickly arrested. Evidence against him seems overwhelming and irrefutable. Of course, in movies, a scenario such as this only can mean one thing: The guy didn't do it. It doesn't take long for the shooter's attorney (Rosamund Pike) to become embroiled in an attempt to discover why Sikora's character has been made into a patsy.

She has help. Just before slipping into a coma, Sikora's character scrawled one sentence on a legal pad, "Get Jack Reacher."

Pike's Helen hires Reacher, who turns up in Pittsburgh for reasons of his own, to help figure things out, a task for which he's well-suited because he's a former military policeman known for his brilliant investigatory powers. You know the drill: Reacher's the kind of guy who can visit a crime scene and notice things that the police always seem to overlook.

The cast of characters drawn together by the murders includes the Pittsburgh District Attorney (Richard Jenkins), who happens to be Helen's father, a man with whom she has long-standing but ill-defined tensions. David Oyelowo plays the lead detective on the case. Neither the DA nor the cop can understand why Helen insists on wasting time on such an unambiguous situation.

Looking a little gaunt in the face, Cruise does his version of the tough, mysterious loner, and the rest of the actors do little to compete with him. How tough is Reacher? He can take out five guys in a fight outside a bar.

The villains in Jack Reacher offer the only hints of personality. They're led by Werner Herzog, a director who spends most of his time behind the camera. Herzog brings just the right amount of sadistic intensity to the proceedings. He's not playing a villain, but Robert Duvall -- in a late-picture appearance as the owner of a shooting range -- adds life to a story that's not without a few dull spots.

The mystery at the heart of writer/director Christopher McQuarrie's screenplay isn't especially compelling, and Jack Reacher builds toward a shoot-out at a construction site that doesn't exactly represent a high point in the history of imaginatively presented action.

McQuarrie, who wrote the screenplay for Cruise's Valkyrie, receives a major assist from cinematographer Caleb Deschanel, who gives Pittsburgh an appropriately noirish sheen, and who has fun with a woozy car chase, the movie's best action set piece.

But there's something tired and lame at the core of Jack Reacher, which doesn't exactly break fresh cinematic ground.

I know there's nothing new under the sun, so there's no shame in telling a story about another tough guy who'll let nothing stop him from exercising his own brand of justice. But unlike the best of Cruise's Mission Impossible movies, Jack Reacher isn't enough fun to make you overlook its flaws. And you can't take it all that seriously, either.