Judd Apatow puts a toe into mature waters, but doesn't forget to bring along the laughs. 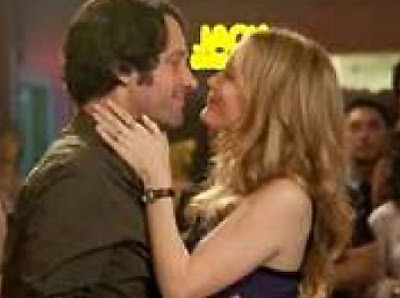 It takes a long time to get to her, but when the new Judd Apatow comedy, This is 40, arrives at a scene that's stolen by Melissa McCarthy, the humor suddenly becomes incendiary, foul-mouthed and very funny. Building on the crudeness she established in Bridesmaids, McCarthy scores big -- so big, in fact, that writer/director Apatow had the good sense to include one of her character's rants in an outtake.

But I digress, even before I begin.

In this mostly enjoyable outing, Apatow casts Paul Rudd and Leslie Mann (Apatow's real-life wife) as a husband and wife who also happen to be the self-absorbed parents of two daughters (Apatow's real daughters, Maude and Iris). Rudd's Pete runs a Los Angeles-based record company devoted to indulging his passion for '70s rock. Mann's Debbie owns an upscale boutique. And, yes, This is 40 represents a reunion for Rudd and Mann, both of whom appeared in Apatow's 2007 comedy, Knocked Up.

Of course, Pete and Debbie are way past knocked up. They're deeply ensconced in the grind of family life. Over the years, their relationship has lost a good deal of its romantic luster. Not surprisingly, Pete and Debbie have issues -- not the least of which revolves around the financial help Pete gives to his father (Albert Brooks), a likable freeloader who has started a new family.

A sharply funny Brooks -- who immediately raises the movie's comic ante -- plays an older man married to a younger woman and now grappling with three young children. Long on gall, Dad views any resistance by Pete as evidence of his son's selfishness. Never mind that Pete has financial troubles of his own.

Perhaps to balance things, Debbie's father (John Lithgow) enters the picture, as well. He's also married to a younger woman, and has been estranged from his daughter for years.

As the movie progresses, Lithgow's character sheds the bonds of caricature and becomes a real, flesh-and-blood father. Credit Apatow with mixing some expectedly crude humor (not all of it funny) with a few well-played scenes in which the writer/director makes a welcome journey into adult territory. Hey, at least he's putting a toe in deeper waters.

Unlike a comedy such as The Guilt Trip, This is 40 is no anemic two-hander. Apatow not only makes room for Brooks and Lithgow, but for Jason Siegel (as an overly confident physical trainer), Graham Parker (as a musician who can't sell any of his new recordings), Chris O'Dowd (as one of Pete's employees) and Megan Fox (as a woman who works in Debbie's boutique).

That's a decent amount of support for a comedy that aspires to be attuned to the debilitations of middle-age, many of them shockingly trivial. Pete is a little too fond of cupcakes. Debbie likes to sneak cigarettes. In this sun-splashed and mostly prosperous LA world, what could be more sinful than overeating or doing something that poses a direct threat to robust good health?

At 134 minutes, This is 40 probably overstays its welcome, and no one's likely to confuse it with Ingmar Bergman's Scenes from a Marriage, which Apatow reportedly watched before making his movie. OK, so Apatow isn't making great art, but, then again, Bergman didn't get many laughs, either.