A different setting, but it's the same old Tarantino. 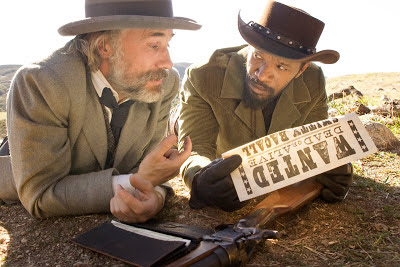 Having taken vengeance for the horrors Jews suffered at the hands of the Nazis in Inglourious Basterds, Quentin Tarantino shifts his attention to blacks in Django Unchained, a wild assault on the antebellum South: land of plantations, slavery, sexual perversity, leering sadism and bloody violence.

If you're wondering -- as I am -- why Tarantino has assumed so many vengeful burdens, I'll wonder along with you. I leave it you to decide whether Jews and blacks should be grateful, offended or indifferent to revisionist fantasies conducted on their behalf.

I wasn't a total fan of Inglourious Basterds, but I'd rank it above Django Unchained, another Tarantino exercise in genre eclecticism that twists the past into something as lurid as an exploitation movie -- only one in which the comic elements have ceased being inadvertent and clearly were intended.

Django Unchained borrows from Spaghetti Westerns (notably 1966's Django by Sergio Corbucci), rap music (I'm not kidding), Blaxploitation movies of the '70s and even other Tarantino movies. In assembling the movie's several acts, Tarantino creates a work that's wanton in its excessiveness -- and that includes its two-hour and 46-minute length.

That's an awfully long time to tell a relatively simple story about Django (Jamie Foxx), a slave who's freed by a bounty hunter and who develops into a kind of laconic cowboy hero with whom no one would want to mess.

Those who know Tarantino's movies (and who doesn't?) won't be surprised to learn that Django Unchained lets the N-word flow freely, includes a surfeit of vividly mounted violence and splashes its way through the kind of old-fashioned southern racism that looks indistinguishable from sadism.

Tarantino fans probably won't mind any of this, and those who don't count themselves among the director's devotees may be consoled by performances that include tasty turns from the incomparable Christoph Waltz (as the bounty hunter who frees Django from slavery and makes him a partner) and Leonardo DiCaprio (as a genteel southern slave owner and monstrous example of humanity).

In many ways, Django is a tonal free-for-all, even boasting a scene that may remind you of Mel Brooks. Tarantino depicts a gathering of Klansman as a convocation of dimwits who complain about not being able to see through the eye holes in masks that have been crudely and ineptly made by the wife of a Klansman.

Other scenes seem to transpose familiar Tarantino tropes (exchanges of dialog that play like gunfights) into new settings.

The story seems nothing more than an outline onto which Tarantino grafts numerous riffs. Waltz's Dr. King Schultz, a former dentist turned bounty hunter, liberates Django in the early going. Schultz's motives aren't entirely altruistic; he knows Django can identify a couple of hoodlums he's been hunting. He wants to collect the reward money.

Django and Dr. Schultz work together before heading to Mississippi to rescue Django's wife (Kerry Washington), who was sold to another slaver after the couple was caught trying to run away. Washington's Broomhilde even speaks a little German, a skill that the screenplay makes use of later.

During this phase of the movie, Foxx pretty much holds himself in reserve, saving Django's blossoming fury for a finale in which it emerges with explosive force.

But Foxx carries a big -- and perhaps impossible -- burden here: He's not only playing a character, he's illustrating ideas about the ways in which blacks have been portrayed on screen with a view, one supposes, toward ultimately subverting such stereotypical images.

To rescue Broomhilda, Django and Dr. Schultz must invade the preposterously named Candieland, a massive planation owned by DiCaprio's Calvin Candie, a plutocrat who enjoys watching dogs tear apart runaway slaves, has a black mistress and forces strapping black men to fight to the death for his personal amusement.

Schultz and Django concoct a ruse that gains them entry into Candieland. They pretend to want to buy a fighter of their own. They hope that Candie will include Broomhilda as an add-on, someone with whom the German-born Schultz can enjoy chatting in his native tongue.

Once in Candieland, Django and Schultz also encounter Stephen (Samuel L. Jackson), a house slave whose speech and inflections recall Jules, the character Jackson played in Tarantino's Pulp Fiction. Stephen, who has served the Candie family for years, isn't outwardly subservient, but he knows where his Big House bread is buttered. He remains loyal to his master.

Tarantino builds tension, and some of the scenes in Django Unchained are beautifully executed, DiCaprio, Waltz, Foxx and others at a tense formal dinner in Candieland, for example.

Enjoyable in bits and pieces Django Unchained is another off-the-hook helping of Tarantino. If you want to take the movie seriously, you can argue that Tarantino is playing around with film iconography from several generations of "B" and mainstream movies, although that may make Django Unchained a tough talking entertainment for cinema geeks. You also can look at it as a full-blown exercise in absurdity or as a simple revenge saga.

But whatever it aspires to be, Django Unchained felt a little old hat to me, Tarantino strutting his stuff in another genre playground. And by now, Tarantino movies have acquired an almost clubby aura in which cinematic in-jokes, outré slices of violence and ample helpings of the "MF" word act as signifiers of a brand of movie "cool" that forgives every indulgence and all manner of cruelty, so long as the tables eventually are turned.

But the trouble with revisionist revenge sagas is that they don't really loosen the grip of the past; they take aim at images and play with situations we know from other movies, often standing them on their heads. The whole business is a bit like shooting at ghosts. You make a lot of noise, but, in the end, you have to wonder whether you've actually hit anything.