On the road with Mom

Barbra Streisand and Seth Rogen as mother and son in a contrived and mostly mediocre comedy. 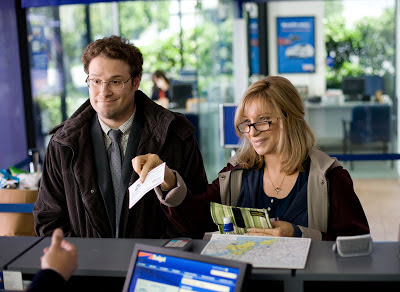 Devoted Barbra Streisand fans may turn out for The Guilt Trip, a comedy that tries to expand Streisand’s reach into the comic sphere in which Seth Rogen lives. I suppose it's a natural progression for an actress who already played Ben Stiller 's mother in two Focker movies. What's next? Babs as Jonah Hills mother?

This time, Streisand plays the widowed mother of Rogen’s Andrew, a chemist who’s trying to peddle an environmentally safe cleaning product that he recently invented. That may not sound like the basis for a road movie, but that’s precisely where director Anne Fischer takes a comedy built around predictable scoopfuls of mother/son craziness.

From what I've already told you, you should know that Jewish mother Joyce (Streisand) will drive her son Andrew (Rogen) to distraction before it becomes clear -- as in such movies it must -- that mother really does know best.

The story -- a bit of endurance test, really -- jams Rogen and Streisand into a compact car -- and asks us to ride along with them.

Here's how it happens: Andrew, who's visiting his mother in New Jersey, is about to drive across country in an attempt to sell his revolutionary new product to major retailers. Andrew tells his mother he wants company, but his real purpose is to take Mom to San Francisco so she can re-unite with a boyfriend from years gone by.

Why does Andrew care about this? In an early picture revelation, Mom tells Andrew that he’s named for this very same fellow, a man she passionately loved but who didn’t return her affections. Evidently, Andrew’s father was Joyce’s rebound choice for a husband. And, yes, all of this comes under the heading of too much information for any mother to be sharing with a son.

In a movie built from sheer contrivance, nothing needs to make much sense, but in playing the ineffectual (in both business and love) Andrew, Rogen sacrifices himself on the Streisand altar. It’s difficult for me to imagine hardcore Rogen fans flocking to a movie in which Streisand is the main attraction. This could be Rogen’s first appearance in something that qualifies as a chick flick.

Director Fischer doesn’t do anything special with material that’s built around in-car banter and a couple of major comic set pieces, the most prominent of which is set in a Texas restaurant where Joyce takes on the challenge of eating a four-pound steak. If she finishes, the steak is free. She also meets a handsome Texan in the bargain.

I chuckled a few times. But let’s face it: Whatever character Streisand plays, she can’t be anything other than the Streisand. So if you’re a Babs' addict, you’ll get your fix, and maybe you won't care that The Guilt Trip borders on the insipid.

Others may find The Guilt Trip to be a less-than-hilarious ride that leaves them to wonder who thought it would be an amusing character trait for Joyce to insist on eating M&Ms in bed.

Put another way, there's a whole lot more mediocrity than guilt in this trip.