'Lay the Favorite': A break-even bet

Director Stephen Frears offers a light take on the world of gambling. 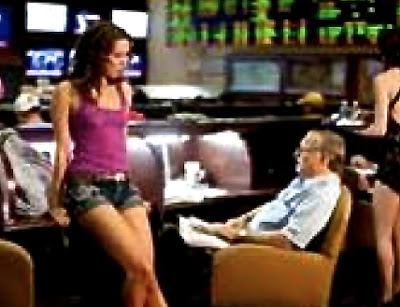 After watching Lay the Favorite, the latest film from British director Stephen Frears, I turned to the Rotten Tomatoes web site to see how the film -- which debuted at last January's Sundance Film Festival -- had fared with other critics.

I was shocked to see that Lay the Favorite, a gambling comedy based on a true story, had scored a paltry 26 percent on the Tomatometer. In other words, most of the critics that Rotten Tomatoes tracks not only disliked Lay the Favorite, they came close to hating it.

I admit to shock because Lay the Favorite, which could be considered a very distant cousin of such Frears' movies as 1990's The Grifters, hardly qualifies as an object for cinematic scorn. It's not Frears's best work, but it's a colorful and sometimes amusing look at people who make their living betting, and it involves characters who aren't pushed to the tawdry limit.

Casting way against type, Frears puts British actress Rebecca Hall in the role of a private dancer who sets out to break new career ground in Las Vegas. After failing to land a job as a cocktail waitress, Hall's Beth Raymer finds work placing bets for a professional gambler (Bruce Willis) who's attracted to her abilities with math -- as well as to the way she fills out a pair of short shorts.

Problems arise because Willis's character -- one Dink by name -- is married to Tulip (Catherine Zeta-Jones) a woman who doesn't like competition. Tulip takes a strictly business approach to marriage: She insists that Dink vowed to take care of her, and says she'll reciprocate as long as he doesn't stray.

The screenplay, based on a memoir by the real Beth Raymer, also introduces a New York-based bookmaker. An over-zealous Vince Vaughn plays Rosie, a gambler who's as impressed by himself as he is by any of the teams on which he bets. Unlike Dink, Rosie's an illegal bookmaker, and Beth goes to work for him in New York when things turn sour in Las Vegas.

Along the way, Beth becomes involved with a journalist (Joshua Jackson), a mostly normal guy who represents -- at least for a time -- a break with the hustling world.

The major achievement of the screenplay by D.V. DeVincentis, involves the ways in which the characters are forced to behave challenge our initial assumptions about them. And although none of the performances are likely to turn up on Oscar's short list, they're mostly within the range of what Frears is looking for, a slightly cracked comedy lodged in the unpredictable world of gambling.

Lay the Favorite isn't a change-your-life movie. I'm not sure it has a whole lot to say, but it doesn't take itself seriously enough to qualify as a demonstrably bad bet.