You may find imperfections, but the big-screen version of Les Miserables ultimately proves stirring. 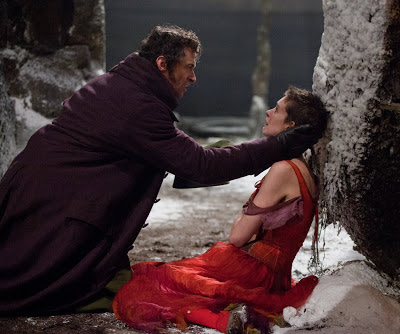 The voices sometimes seem to be straining. An abundance of extreme close-ups tends to give the movie a feeling of cramped intimacy. Although filmed mostly on sets, the movie steeps itself in gritty 19th century realism. It's a musical with dirt under its fingernails.

I'm talking about Les Miserables, the big-screen adaptation of the much-revered musical that made its debut in Paris in 1980 and seems to have been in production somewhere ever since.

Melodramatic, operatic and seen through cinematographer Danny Cohen's dark lens, Les Miserables bypasses its imperfections, ultimately getting where it needs to go. It's less a story well-told than a production massively mounted, but that may be precisely what the material needs.

Based on an 1862 Victor Hugo novel, Les Miserables thunders its way through nearly three hours of suffering, death and melodrama, frequently miring its cast in mud, muck and -- as the title promises -- the kind of bone-deep misery that might have roused envy even in Dickens, himself no slouch when it came to injustice and suffering. 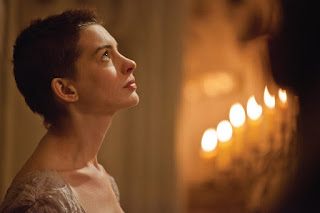 As directed by Tom Hooper (The King's Speech), Les Miserables is top heavy with marquee names, including Anne Hathaway, who tackles the role of the tormented Fantine in a performance in which emotion seems to spill from her every pore.

I'm not going to provide background for every character in Les Miz, but Fantine, you may recall, is a single mother, a status that caused her to be scorned and persecuted for profligacy in France of the 1800s. And, yes, it might be advisable to bone up on Hugo's story before you go because plot points breeze by as if propelled by wind machines.

The story centers on poor Jean Val Jean (Hugh Jackman), the ex-convict who violates his parole and spends a lifetime fleeing Javert (Russell Crowe), a lawman who applies justice like a lash. Amanda Seyfried turns up as Fantine's daughter, Cosette, a woman who eventually is sheltered by Jean Val Jean.

All of this takes place against a post-revolutionary historical backdrop in which the monarchy has been restored in France, and the people are suffering under the weight of too much regal indifference.

The movie's third act deals with the revolt of 1832, introducing us to Marius (Eddie Redmayne), a revolutionary who's smitten by Cosette. Be assured barricades will be stormed. The spirit of the people will be aroused. You will be stirred. 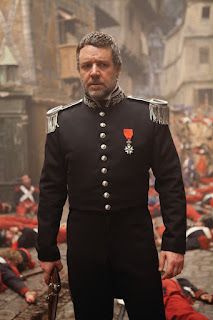 To heighten the feeling of emotional urgency, Hooper had his actors sing their numbers as the cameras rolled rather than relying on lip-synching. The technique is employed to mixed result.

Jackman, who has a history in musical theater, carries it off convincingly, as does Hathaway. Crowe, who has a background singing with rock bands, is only moderately successful. Trussed up in the costume of a 19th century lawman, Crowe moves around as if encased in plaster. Javert's a rigid guy, but Crowe never seems entirely comfortable playing him.

Hooper doesn't quite suffocate the production, but I wish he had let it breathe some, and I got tired of watching close-ups of the singers. Hooper must have wanted his camera to bring us close to the performances, but the face of a singer -- particularly when grappling with heavy emotion -- isn't always a thing of beauty.

The major numbers in Les Miserables -- At the End of the Day, I Dreamed a Dream and One Day More -- are effectively performed, and there's even a bit of comic relief. Sacha Baron Cohen makes an appropriately despicable and conniving Thénardier, an inn-keeper who for a time takes charge of Cosette. Baron Cohen receives an able assist from Helena Bonham Carter -- now a specialist in playing grotesque-looking women -- as Madame Thénardier. Samantha Barks makes a bit of splash as their daughter, Éponine.

I'm not a particular fan of musicals, and Les Miz involves wall-to-wall singing with almost no spoken dialogue. I can't exactly say that Les Miserables left me humming any of its tunes. But whatever problems the big-screen version has, I mostly enjoyed it and even felt a slight tingling of the spine during its finale. Put another way, Les Miserables has genuine theatrical power.