Bottling the air from holy sites 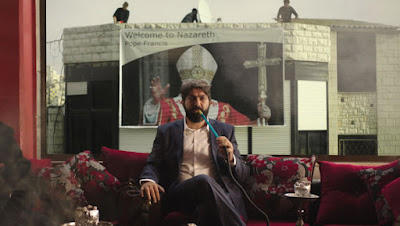 Writer/director Shady Srour stars in Holy Air, a satirical take on a Christian Arab Israeli who embarks on a ridiculous entrepreneurial venture, trying to sell air that he has bottled at the top of Mount Precipice, outside Nazareth. Unable to accept Jesus as the Messiah, some residents of Nazareth attempted to push him off the cliffs of Mount Precipice. Obviously, they failed. This holy site inspires Stour’s Adam to attempt to create a business that will allow him to support his wife (Laetitia Eido) and the child they’re expecting. Adam's sales pitch: He claims to be selling the very same air that the Virgin Mary breathed during the Annunciation. An ardent defender of female sexuality, Eido’s Lamia becomes part of the many vexations faced by Adam, who clearly loves her. Meanwhile, Adam’s equally beloved father (Tarek Copty) is dying of cancer in a local hospital. Obvious satire about the commercialization of religion can carry the movie so far, and the most interesting thing about Holy Air becomes its depiction of the lives of Arab Christians living in Israel. Adam, like other residents of Nazareth, deals with insane traffic jams, as well as with hordes of religious tourists and the hucksters who try to fleece them — not to mention those who seem to be aligned against the Arab/Christian minority; i.e., just about everyone.*
* Comment below is correct. Stupid mistake. I've corrected it but made it in the originally published review. Apologies and thanks to the reader who pointed out my error.

Nazareth is in Israel proper, not the West Bank. Pretty basic info.