Margot Robbie does stand-out work as a figure skater battling long odds, class prejudice, and her own demons. 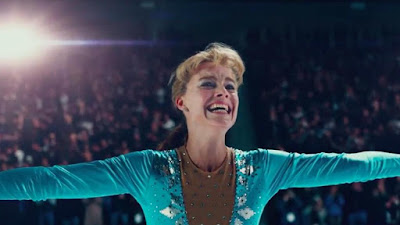 Most movies about athletes build toward a big contest in which the main character either triumphs or, in rare cases, learns from a crushing defeat. By such measures, I, Tonya -- the story of disgraced figure skater Tonya Harding -- might be considered an anti-sports movie. It touches on subjects as diverse as class prejudice and the abuse of women, not to mention a criminal assault committed by a collection of bumbling fools.

I, Tonya also can be unexpectedly funny because director Craig Gillespie has given the movie a near-antic spirit that derives from a keen appreciation of the rank absurdity rippling through various layers of American society.

I, Tonya, of course, revolves around the 1994 episode in which Harding was blamed for a devastating attack on Nancy Kerrigan, the figure skater who became the anti-Harding. In the movie, responsibility for a ham-handed attempt at knee-capping falls to a goofball associate (Paul Walter Hauser) of Harding's abusive husband (Sebastian Stan).

According to the movie, Hauser's Shawn concocted a scheme in which a couple of hired thugs did Shawn's bidding. One of them took a retractable baton to Harding's knee in an attempt to keep her from participating in a National Competition prior to the Lillehammer Olympics of 1994.

Harding herself knew nothing about any of this, although she was vaguely aware that Stan's Gillooly was planning to send Kerrigan threatening letters to undermine her confidence, an idea he got after Harding herself received a death threat.

Working from a screenplay by Steven Rogers, Gillespie allows several of the characters to offer versions of Harding's story in faux interviews that help to give the movie some wobbly, cockeyed spin.

But I, Tonya isn't a lower-class Rashomon and it has less interest in anyone's guilt or innocence than in Harding's place as an outlier in the world of figure skating.

Harding had obvious skills, but she had to battle (often unsuccessfully) the notion that female figure skaters should be ice princesses, uncorrupted representations of purity and innocence. It's all hooey, of course: No one becomes a champion figure skater without the kind of single-minded self-absorption and drive that justifies long hours of training and sacrifice.

Harding's sometimes garish outfits and her working-class background overshadowed her skill with judges who were looking to promote not only talent but a "worthy" vision of American "girlhood."

Robbie’s performance captures both Harding’s defiance and vulnerability, as well as her belief in her own innocence. She sees herself as a woman constantly being abused by others and who has no interest in smoothing her rough edges.

It's not difficult to see some justification in Harding's viewpoint. Her husband physically abuses her. Stan's Jeff Gillooly displays a bit of rough charm, but Harding sticks with him long past the time when their love has passed any reasonable expiration date.

The biggest obstacle to Harding’s shaky confidence is her caustic, domineering mother, rendered in furious blasts of cigarette smoke by a terrific Allison Janney.

Janney’s LaVona, a waitress by trade, pushes and goads Harding, seldom missing a chance to belittle her daughter. Janney knows how to put comic spin into her work, peppering her dialogue with blistering sarcasm, some of it bitingly funny.

Robbie did some of the movie's skating, but stunt doubles presumably filled in when it became necessary to show Harding's triple axel, a difficult maneuver that she became the first American woman ever to execute.

Julianne Nicholson plays Tonya's coach, a woman who tries to help Tonya fit into an acceptable mold, and Bobby Cannavale does duty as a TV tabloid reporter, present only to suggest that Harding's story became fodder for a media that couldn't get enough of it.

The real Harding is tougher looking and physically more compact than Robbie, who made her first big splash in Wolf of Wall Street. But Robbie nails the pugnacious spirit of a young woman who has been kicked around plenty — by the authorities in her sport, by her mother, her husband and a voracious media that turned her into the butt of many cruel jokes.

I don’t know how to sort out my feelings about the real Harding, but Robbie and Janney are working at peak form, and I'll tell you this, as well: I, Tonya made me think about all the Tonyas in our culture, the ones who’ve never even gotten close to their 15 minutes of fame, who've never had their stories told and who somehow survive life’s battering, their fury undiminished.