Scars of hatred and the American West 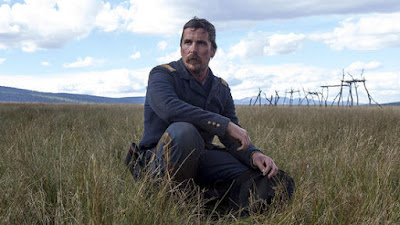 Sometimes, in straining to grapple with deep issues, a film can show more strain than grapple. That struck me as the case with Hostiles, a Western that wants to explore the impact of genocidal behavior -- not so much on its Native American victims -- but on the US soldiers who fought the many battles that led to the near-destruction of the indigenous populations of the West.

From the outset, director Scott Cooper makes his position clear. He begins with a chilling DH Lawrence quote that serves a tone-setter for what's to follow: “The essential American soul is hard, isolate, stoic, and a killer. It has never yet melted," Lawrence wrote.

In the world Hostiles imagines, whites hate Native Americans and Native Americans return the favor, each group seeing the other as murderous savages. Of course, if victory has anything to do with savagery, the whites are the greater offenders.

Christian Bale plays Captain Joseph Blocker. A grizzled veteran of the so-called Indian wars, Blocker hates the Native Americans who have taken the scalps of many of his comrades in arms. Perhaps in an attempt to balance the scales, a visiting Eastern writer accuses Blocker of having taken more scalps than Sitting Bull.

But -- or so the argument goes -- for Blocker, killing is the job that he's sworn to do.

Blocker faces a challenge when he's ordered to escort a dying Cheyenne chief (Wes Studi) and his family from New Mexico to Montana. On orders from the president Benjamin Harrison, the Army must make it possible for the imprisoned Yellow Hawk to die on land that he calls home.

A staunch believer that Native American savagery knows few bounds, Blocker makes little attempt to conceal his disdain for Studi’s Yellow Hawk, a man who has killed his share of white men. Both men fought at Wounded Knee.

Not long after the journey begins, a woman whose family is massacred by Comanche warriors (Rosamund Pike) in the movie's brutal prologue, joins the group. Pike's Rosalie is stunned and bereft and Blocker treats her with a tenderness that suggests that he may not be quite as hard-hearted as we've been led to believe.

The movie’s major question becomes obvious from the start: Will Blocker come to some sort of appreciation for the fact that Yellow Hawk and his family are human beings, no less wounded and embittered than he? Both men are deeply scarred, but Yellow Hawk seems to have done a better job of carrying his burden.

Ben Foster turns up as a soldier whose wanton disregard for life makes him one of the movie’s only true savages. Blocker shows him no mercy, although Foster's character insists that, as soldiers, they are kindred spirits.

Cooper tries to add some complexity, distinguishing between various tribes. At one point, Yellow Hawk helps the soldiers fight off a group of vicious Comanches that he likens to rattlesnakes, vipers who will destroy whites and Native Americans alike.

I’m not sure Cooper knows how to resolve the gaping contradiction that occurs when racism and humanity begin to clash in the same characters. In addition, those who argue that the movie represents another attempt to use indigenous people to redeem a white character shouldn’t entirely be dismissed.

It’s difficult to shake the feeling that Cooper isn’t so much telling a story as he’s applying contemporary sensitivities to the nagging problem of how whites can resolve the undigested shame that results from the way the US has treated Native Americans. He turns the film into a kind of social laboratory that often strands its actors in self-conscious silences.

The characters in Hostiles are laconic and, to cite Lawrence, hard and isolate, but when it comes to articulating the movie's points, they also seem to speak in ways that hit too many points squarely on the nose. Whatever the case, Hostiles doesn’t quite find its way through the rough thematic course it sets for itself.