A great moment for journalism

The Post tells an important story and features a finely etched performance from Meryl Streep. 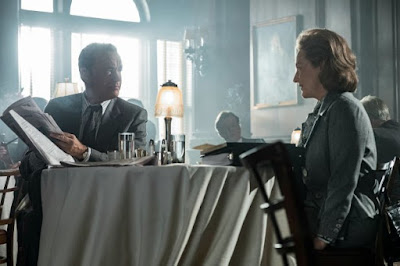 I can't imagine anyone who ever has worked at a newspaper not giving a big thumbs up to The Post, director Steven Spielberg's stirring take on a story about the Washington Post's struggle to become a major player in the news game while, at the same time, performing an important national service. The Post, the movie reminds us, grabbed its share of history when it published the Pentagon Papers in 1971.

"Wait," you say. Wasn't The New York Times the first newspaper to publish the Pentagon Papers?>

Yes, The Times was first, but The Post picked up the task after the Times was blocked by a court order from publishing any more of the 7,000-page secret document that proved that the government consistently lied about its "accomplishments" in Vietnam.

It probably takes a director such as Spielberg to take a straightforward approach to a complicated story that involves maneuvering by Post reporters and executives on any number of levels -- from the corporate to the logistical.

When the Post picked up the Pentagon Papers, it wasn't clear that the paper wasn't risking its own future. The company was about to go public so that it could obtain a much-needed infusion of capital. Some of the Post's attorneys argued that defying the government might scare off potential shareholders.

Spielberg's drama begins when Daniel Ellsberg (Matthew Rhys) copies the Pentagon Papers with the idea of making them widely known. Ellsberg turned from a military analyst to a whistleblower after he heard Secretary of Defense Robert McNamara (Bruce Greenwood) lie to the press about how the US was faring in Vietnam.

Graham became the Post's publisher after her husband Phil committed suicide in 1963. She had great respect for the paper but hadn't fully grown into the role of publisher when the Pentagon Papers became available.

Hanks adds some growl to a variable Boston accent as Bradlee, but can't top Jason Robards' version of the much-admired newspaperman in All the President's Men. Still, he captures Bradlee's impatience with fools and his burning desire to kick the Post's reputation up a notch.

Streep gives the movie's best and most complicated performance. Graham was a close friend of McNamara, who implored her not to publish the Pentagon Papers. She traveled in the strata of Washington society geared toward steadying the ship, not rocking the boat. She values her friendships but ultimately understands that her duty is to the truth.

The Post certainly speaks to the current moment; the movie can be read as a reply to those who would tarnish journalism with "fake news" pejoratives. Spielberg throws a counterpunch that the country needs at the moment, a reminder that the press is an indispensable part of democracy.

Now, I should hasten to say that The Post can't equal All the President's Men, which had a sense of fervor that Spielberg's picture can't quite match, perhaps because its approach is so on-the-nose that the movie sometimes feels like an illustrated history augmented by currents of feminism (there weren't many women newspaper executives at the time) and journalistic jousting.

A large and credible supporting cast helps carry the story across the finish line. The movie features a particularly nice turn from Bob Odenkirk of Better Call Saul fame. Odenkirk plays Ben Bagdikian, the Post reporter who persuaded Ellsberg to give the Post copies of the Pentagon Papers: Bagdikian carried the papers to Washington in cardboard boxes on a commercial flight. He bought a seat for the boxes so they'd never be out of his sight.

Spielberg emphasizes the role journalism plays when everything that can be deemed "fake'' is coming not from newsmen but from those whom reporters doggedly cover.

Put another way: Chalk one up for every beleaguered journalist who has been reviled as a member of the media instead of appreciated for working hard to get as close to the truth as possible.