The road to catastrophe in Russia 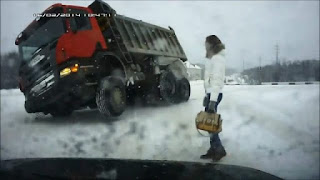 Few issues are subject to as much debate as the impact that movies have on us. Are they simply entertainment? Do they influence the way we behave? Can they change values or inspire changes in behavior? The Road Movie isn’t likely to prompt deep conversations, but it's likely to leave little doubt about its impact. I’m betting that if see it, you’ll never want to venture onto a Russian highway. An assemblage of found footage, all of it taken from dash-cams, The Road Movie only can be watched with wide-eyed disbelief. You’ll see head-on collisions. You’ll see trucks tipping over. You’ll hear angry motorists cursing one another. You'll see a woman use a cigarette lighter to check on whether her gas tank has been filled. No, she's probably not a candidate for MENSA membership. You’ll wonder exactly why you’re subjecting yourself to a series of punishing images, some of them catastrophic. Did I mention the robbery or the guy who was carrying a sledgehammer? Maybe director Dimitri Kalashnikov latched onto a gimmick and pushed it as far as he could or maybe he hoped to provide a glimpse into dark corners of the Russian soul. If it's the latter, Kalashnikov has taken a route that by no means qualifies as scenic.