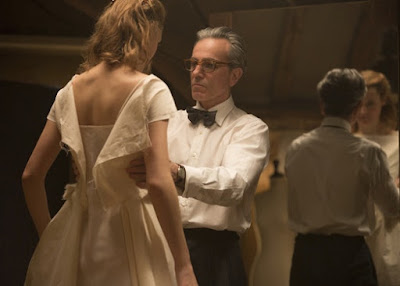 In what he says is his last screen performance, Daniel Day-Lewis reunites with director Paul Thomas Anderson (Let There Be Blood) to play a fastidious clothing designer who plies his trade in London of the 1950s. Day-Lewis’ Reynolds Woodcock (I leave it to you to deconstruct the surname) dresses women in ways that tend to stamp them with an identity: his. He designs, measures and sews until every woman who wears one of his gowns becomes a perfect representation of one of his sought-after visions.

It’s impossible (and perhaps inadvisable) to watch Day-Lewis in Phantom Thread without considering Woodcock as the embodiment of a certain kind of meticulous artist. His creations can have flourish and sweep, but they are also marked by an attention to detail that goes beyond obsessive to touch the border of tyrannical.

For Woodcock, the dress eclipses the importance of the woman who wears it. He considers himself a visionary, but he works in the world of fashion where whim and shifting tastes can undo a reputation.

A bachelor when we meet him, Woodcock allows his sister (Lesley Manville) to keep his business on track. She’s a guardian and facilitator, the woman who takes care of all the details that Woodcock prefers to ignore. She knows that Woodcock requires space to create. A finely tuned instrument, he can be thrown off by the sound of toast that’s too noisily buttered or a vegetable that's not cooked to his exacting specifications.

Looking gaunt and composed with gray hair swept back to emphasize a steep brow, Day-Lewis takes the full measure of this unusual man, an artist for whom the external world poses constant threats to his powers of concentration.

Initially, Anderson devotes the movie to establishing Woodcock’s world, a domain over which he exerts absolute control — until the arrival of Alma (Vicky Krieps), a waitress in a country restaurant where Woodcock happens to dine. Woodcock invites Alma to become one of his models.

Alma replaces Johanna (Camilla Rutherford), a model who became a little too demanding for Woodcock’s taste.
When Woodcock brings Alma to his home, he tells her that her imperfections — she cites her small breasts — are not problems, at all. She's the landscape on which the great Woodcock will create his next masterpiece.

Not surprisingly, Alma soon begins to test Woodcock’s patience. She may not be quite as manageable as Woodcock initially hoped. Krieps gives Alma an assertive edge, and it becomes clear that this relationship will take over the movie: Woodcock and Alma are locked in a kind of dance in which he tries to exert his control and she resists.

By this time, Alma is living in Woodcock’s home, working full-time as his model and muse. But she refuses to disappear when he’d prefer not to see her.

Now, as is the case with most movies, it falls to Anderson to make something out of all that he has set in motion — with restraint, wit, and the precision of an elegant camera. Even in a character study, the characters eventually must do something. Anderson must take the finely spun cloth of the movie and weave it into something whole and finished.

How you respond to Phantom Thread may depend on what you make of the twist that Anderson brings to the movie.
I’m prepared to listen to those who disagree, but, for me, as Phantom Thread began adding a twist to the atmosphere Anderson creates, the movie's spell was broken for me. Little more can be said without introducing spoilers, so I’ll simply say that Anderson eventually defines what either can be viewed as a perfect match or a relationship of intricately blended perversities.

The performances are all first rate. By now, we all have come to appreciate Day-Lewis’ ability to inhabit characters in ways that are thorough and commanding without being showy. Watch Day-Lewis create Woodcock's smile, easy yet tentative, almost as if the designer's face is engaged in a game only he understands. Like everyone else who values his work, I hope that Day-Lewis reconsiders his proposed retirement.

Krieps gives the movie’s most surprising -- and in a way -- most dominant performance. Alma's disregard for the high pretenses of art border on a form of bullying. She brings an insistent presence to Woodcock's carefully managed home.

Phantom Thread stands as an absorbing work that proves mildly unfulfilling, a beautifully designed garment that ultimately hangs in a rather small closet. Put another way, what builds novel-like expectations at the outset winds up feeling like a short story by the end.

But that doesn't mean I wouldn't encourage you to see it -- for Day-Lewis, for Krieps and Manville, and for Anderson's insistence on making movies suited only to his own singular taste.