The woes of a beleaguered commuter 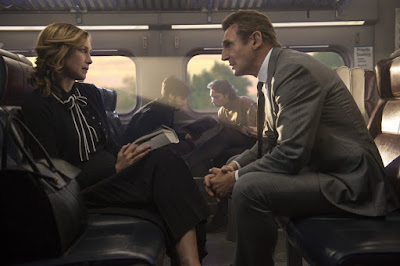 Liam Neeson wields his considerable gravitas in another collaboration with Jaume Collet-Serra, who has directed Neeson in movies such as Run All Night, Non-Stop, and Unknown. Throw in the Taken movies — not part of the Collet-Serra/Neeson collection — and you have an entire genre based on Neeson’s ability to summon mega-helpings of determination. In the new and decidedly preposterous The Commuter, Neeson portrays a downtrodden suburbanite who makes the daily commute from his home in the New York burbs to Grand Central Station. Oh, and Neeson's Michael MacCauley also happens to be a former member of the NYPD who gave up police work to become an insurance agent. In what amounts to a super-contrivance, the screenplay loads the deck against Neeson's Michael. He and his wife (Elizabeth McGovern) lost most of their savings in the market debacle of 2008. Michael needs money to send his son to college but meets with another obstacle when he’s fired from the job he’s held for a decade. On the commute home, a dejected Michael encounters a stranger on a train (Vera Farmiga) who makes him an offer: $100,000 if he’ll find a person who’s not supposed to be on the train and relieve that person of a bag that contains something that someone desperately wants. Even in his frazzled state, it's difficult to believe Michael would agree, but he does and things get more complicated. The story becomes increasingly ridiculous as the movie, moving like the northbound on which its set, keeps running over its own credibility. Collet-Serra eventually stages some action and Neeson must employ some brawn as the movie builds toward a runaway train finale. Patrick Wilson signs on as Neeson’s former partner on the police force and Jonathan Banks plays one of Michael’s long-suffering fellow commuters, but Neeson holds center stage in a movie that whips up some decent action as Collet-Serra plies his skills in a confined location. But even Neeson’s seriousness can’t make sense out of a non-character in a movie that's derailed by a screenplay that feels generic and implausible.