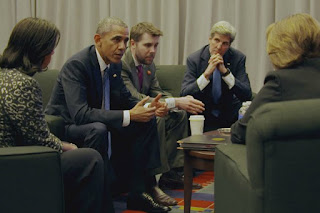 Despite the implications of its title, The Final Year is not another addition to the apparently endless supply of apocalyptic Hollywood movies. It is, instead, a documentary about the final year in office of President Barak Obama's foreign policy team, notably John Kerry (Secretary of State), Samantha Powers (UN Ambassador) and Ben Rhodes (Deputy National Security Advisor). Obama appears from time-to-time, but director Greg Baker mostly concentrates on a trio of conscientious wonks who, during the course of the film, visit 21 countries. Although The Final Year takes an unapologetically positive view of those who populate it, the movie also reflects disagreements within the Obama administration about how to proceed in Syria, and it shows Rhodes dealing with flak about a derogatory comment he made about the White House press corps. Everyone in The Final Year is working under tremendous time pressure, knowing that the Obama presidency was drawing to a close -- and in a way none of them anticipated. The Final Year probably doesn't qualify as a great documentary, but its three principal characters, particularly Powers, are quite impressive. If you're among those who disdain the Trump presidency, this film may make you weep. I doubt whether anyone who doesn't fall into that category will be among those buying tickets.