Chris Hemsworth leads a Special Forces unit into the wilds of Afghanistan. 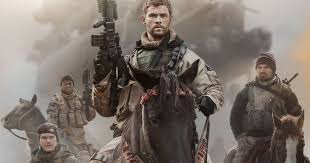 The best war movies generally take a position that gets us beyond strategy, tactics and reflexive expressions of heroism. Considering that, 12 Strong, the story of a Special Force unit that was the first to fight in Afghanistan after 9/11, falls far short of the best in its breed. Though based on a true story, the movie would have been right at home during any summer action-movie onslaught.

Chris Hemsworth, as Capt. Mitch Nelson, leads a group that includes Chief Warrant Officer Hal Spencer (Michael Shannon) and Sgt. First Class Sam Diller (Michael Pena). Trevante Rhodes, recently of Moonlight, also checks in as a sergeant, but proves no more distinctive than any of the other actors in this generically presented group.

When the picture opens, the newly retired Nelson wants to return to action; he can't sit idly by after his country undergoes an attack, which -- at the time -- seemed inconceivable. Sketchy scenes of the soldiers on the home-front are followed by scenes in which the GIs, newly arrived in Afghanistan, try to bond with locals and meet with CIA agents who already were engaged in combat.

As it turns out, Nelson's unit was assisted by forces from the Northern Alliance, in this case, led by General Dostum (Navid Negahban), a warlord who hated the Taliban but could be wary of Americans, as well.

The American soldiers were highly motivated but hadn't been trained for the kind of combat that Dostum knew well. Absent any other way to negotiate Afghanistan's rugged terrain, soldiers were asked to fight on horseback.

Still best known for playing Thor, Hemsworth gives the expected take-charge performance, but the movie doesn't get much from Shannon, who almost always leaves a mark.

The soldiers who fought in some of the world’s worst conditions unquestionably were brave. To make matters even more difficult, they were outnumbered 40 to one. When they wrested control of the city of Mazar-i-Sharif from the Taliban, they made military history.

But that doesn’t mean that their story — based on a book by Doug Stanton — transcends its bounty of action to give us new insights into the war in Afghanistan. Instead, 12 Strong celebrates the usual band-of-bros bravado as director Nicolai Fuglsig garnishes combat sequences with a generous helping of explosions.

For some that will be enough, but the movie fails to lay the groundwork for understanding why, some 17 years later, the war in Afghanistan still rages or what, in the long run, might constitute success in this besieged and battered country.

I don't agree with this review. I haven't seen the movie, so I'm not speaking to its quality. What I don't like is the idea that every movie about war needs to make some political stand or shovelfeed some dimestore philosophy about war being bad. Why not just 2 hours showing a coexist bumper sticker? War isn't just about tragedy, or even violence, war is about human conflict and there are more stories to tell within that than the notion that most human beings already understand that war is not a desirable thing.