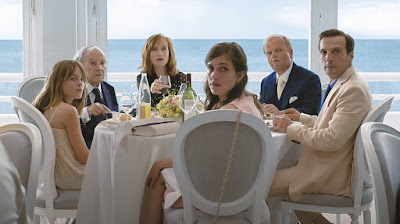 In movies such as Amour, The White Ribbon, Funny Games, Cache and The Piano Teacher, Austrian director Michael Haneke has established himself as one of the cinematic voices most committed to observing the brutal nature of nearly all human interaction. Haneke's movies can have so much edge, one often feels cut by them.

In Happy End, Haneke files down the edge a bit, but still clings to his less-than-optimistic views about society and its despicable perils.

This time, Haneke focuses on the Laurents, a wealthy French family living in the port city of Calais. Georges (Jean-Louis Trintignant), the family's patriarch, has fallen into physical and mental decline. His daughter Anne (Isabelle Huppert) has taken charge of the family’s construction company and is about to announce her engagement to a British businessman (Toby Jones) who's helping arrange a company-saving loan.

Anne’s son Pierre (Franz Rogowski) drinks too much, imbibing hostility along with his wine. Anne’s philandering brother, Thomas (Mathieu Kassovitz), works as a surgeon; Thomas’ daughter from a previous marriage, Eve (Fantine Harduin), has just moved in with her father. Eve's Mom became incapacitated from a drug overdose, a situation that creates discomfort because we know from early images that Eve has an interest in poisons.

Not surprisingly, the characters live behind curtains of self-absorption with Haneke introducing computer conversations and cell phone photography in an attempt to add one more element of alienation, as well to give the story some contemporary spin.

Unafraid to present his images in lengthy takes that defy contemporary pacing, Haneke again immerses us in a world in which the so-called civilized folks are vicious and the rest of society (notably a group of immigrants seen at the end) are innocent pawns. Same goes for poor Rachid (Hassam Ghancy) the family servant who lives in a house next to the large mansion where all of the Laurents reside.

Unlike some of Haneke’s work, Happy End can’t entirely escape dullness, even as its defiant characters work their cruel ways. Happy End is like a snake bite without enough venom as if the snake has become so desensitized by a cruel society that it wants nothing more than to be put out of its own misery.