A recreation of a daring Israeli raid

7 Days in Entebbe isn't a bad movie, but it doesn't dig deep enough to be memorable. 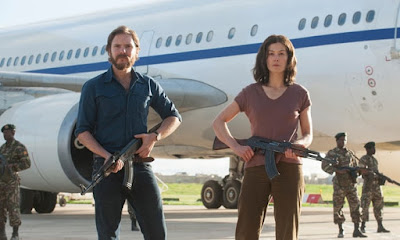 In 1976, Israel launched Operation Thunderbolt, a daring raid in which a small group of IDF soldiers rescued 102 Israelis who had been passengers on an Air France plane that was hijacked by two Germans and two Palestinians.

7 Days in Entebbe, a movie about the hijacking and subsequent Israeli action, arrives nearly 42 years after an event that riveted world attention. Daniel Bruhl and Rosamund Pike headline the cast as German radicals who initially thought they were leading the charge but who quickly were surpassed by Palestinians from the Popular Front for the Liberation of Palestine.

The Palestinians took charge once the plane arrived in Uganda, after a refueling stop in Benghazi, Libya. Once in Entebbe, hostages were housed in a decaying airport terminal that was no longer in use.

Movies such as 7 Days raise an obvious but unavoidable question. Why are we being asked to look at an event that since has been eclipsed by so many other events involving terrorist actions that put innocent civilians in harm's way? In part, the question can be answered with one sentence: Such events are inherently exciting and suspenseful.

But for a movie to succeed, it must get beyond that surface and dig deeper? As directed by Jose Padilha, 7 Days fails to function as more than a cinematic outline, offering quick looks into the motivation of the story's various players.

No stranger to tough, action-oriented movies, Padilha directed the Netflix series Narcos and made Bus 174, a documentary about hostages trapped on a bus in Rio. He also directed Elite Squad, a compelling Brazilian police drama. In 2014, Padilha tried his hand at a Hollywood reboot, a much-derided version of RoboCop .

7 Days emphasizes the importance of the moment at which the hijackers separated Jews from the non-Jews, evoking memories of Holocaust selections in the minds of the Jewish passengers and among the Israeli public.

Rabin knew he had to do something but wasn’t entirely sure that he should dismiss the possibility of negotiating with the Palestinians, something that went against Israeli policy forbidding talks with terrorists. Perez favored military action.

At one point, Uganda's Idi Amin (nicely played by Nonso Anozie) gets involved. He’s able to persuade the Palestinians to release the French hostages.

Padilha’s strangest decision involves the use of the Batsheva Dance Company which does a jarring musical version of Echad Mi Yodea (Who Knows One), a song usually sung at Passover seders. Staged by Israeli choreographer Ohad Naharin, the dance -- seen in rehearsals and eventually in a performance -- proves compelling but because it opens the movie, it tends to upstage the rest of the story and it's never entirely clear why Padihla includes it.

To justify the dance sequence, the screenplay must introduce a superfluous tangent, a relationship between a dancer and one of the Israeli soldiers on the Entebbe raid.

Whatever Padihla was attempting to accomplish, he winds up looking a bit ridiculous when he alternates between a performance of the dance and the movie's climactic end-of-picture rescue.

There’s not much by way of character development among the crew and passengers, aside from a crew member (Denis Menochet) who tries to reason with Bruhl’s character, a publisher of radical books who already has his doubts about the role he’s chosen for himself as a German who may be called upon to kill Jews. The screenplay assigns Bruhl's character a role in saving the lives of the Jewish passengers.

Even Pike’s character, a Baader-Meinhof veteran and the more hardened of the two Germans, eventually admits she might have made a wrong choice.

Padilha knows how to give a realistic pulse to action, and the movie offers an important footnote at the end. Yonatan Netanyahu (Angel Bonanni), the only Israeli soldier to die in the raid, was the brother of Benjamin Netanyahu, Israel’s current prime minister.

Eventually, the movie tells us that if peace ever is to be achieved, Israel must swallow hard and negotiate. 7 Days in Entebbe does little to make that conclusion feel like more than a faint hope, an afterthought rather than a genuine expression of conviction.