A new group battles to save the Earth, but this sequel offers little reason to cheer. 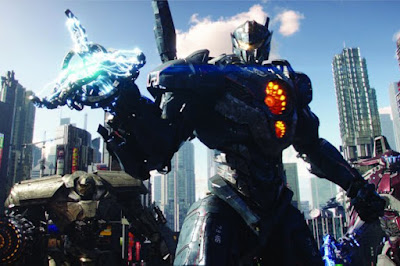 In the summer of 2013, director Guillermo del Toro scored at the box office with Pacific Rim, a movie that introduced audiences to Jaegers, gigantic robot-like creations that stomped through the nation's multiplexes. Jaegers were deployed against the Kaiju. In case you need reminding, the Kaiju were genetically engineered amphibious monsters that arrived on Earth through a portal in the Pacific Ocean — or something like that.

What proved winning about Pacific Rim had less to do with plot or even with its high-stakes battles than with the sheer scale at which Del Toro allowed his imagination to take over the screen.

As just about everyone knows by now, del Toro reigned in the scope of his imagination to make The Shape of Water, a smaller movie but a wise career choice. The Shape of Water won a best-picture Oscar and Del Toro took home the Oscar for best director.

Now comes Pacific Rim Uprising, the inevitable sequel to the first installment. Del Toro remains as one of the film’s gaggle of producers (14 in all) but directing chores have been taken over by Steven S. DeKnight, whose previous directing experience mostly involves TV work.

In DeKnight’s hands, the franchise becomes little more than a collection of cacophonous battle sequences that already have evoked apt comparisons with the Transformer movies. A preview audience seemed to include more kids than I expected. It's possible that 12-year-olds will be Uprising's bread and butter.

A short reaction: Enormous Jaegers guided by pilots who operate inside the robots' heads, giant sea monsters that make a late-picture appearance and a cast that’s subordinated to a flood of effects mark a movie that stomps hard but can't shake loose from the deadening bonds of repetition.

That's not to say that the cast doesn’t work hard. John Boyega, familiar from the latest round of Star Wars movies, appears as Jake Pentecost, the son of the Idris Elba character from the first edition. A renegade from the Pan Pacific Defense Corps that a decade ago fought the Kaiju, Jake makes his living salvaging parts from Jaegers that were discarded after the war that shook the first movie.

Jake is joined by a sidekick, Amara (Cailee Spaeny), an orphaned teenager who has built her own Jaeger and who is recruited to train as a Defense Corps pilot. Naturally, Jake is coaxed back into the Defense Corps where he engages in manly banter with his former co-pilot (Scott Eastwood) as they fulfill their assignment, training a new generation of Jaeger pilots.

Spaeny conveys the required spunk. Boyega projects plenty of gruff magnetism. But there's more smash-and-crash than acting as the movie moves toward a climax in which a crew of teenage Defense Corps recruits must save the world, a task that can’t be accomplished without destroying large parts of Tokyo.

It's possible that Pacific Rim will click with audiences impatient for an early helping of summer, and, of course, it's set up for another sequel. Maybe Boyega and company can find a more engagingly novel third helping.