Jennifer Lawrence takes up the role of a Russian spy. 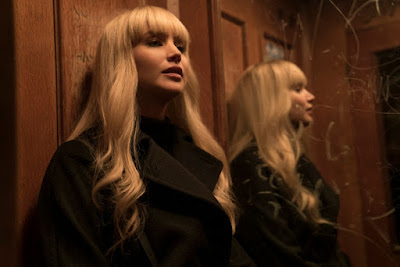 Those damn Russians will stop at nothing when it comes to advancing their cause.

\
No, we're not talking about interference in the last presidential election, but about the spycraft that tends to shape relations between Russia and the rest of the world.

Of course, we're also talking about a movie in which the Russians have invented a special spy-training agency that teaches men and women the fine arts of seduction and manipulation. Humiliation and intimidation are used to turn female students into "whores" for the Motherland, wiping out any traces of propriety or pity.

Those who make it out of the program are called Sparrows.

The aptly titled Red Sparrow stars Jennifer Lawrence as Dominika Egorova, who -- at the movie's outset -- is an acclaimed star of the Bolshoi ballet. Dominika’s career comes to an abrupt end when her leg is broken by a clumsy dance partner during a performance.

Eager to preserve her Bolshoi privileges — mostly for the sake of her ailing mother — Dominika follows the advice of her sleazy uncle (Matthias Schoenaerts), a man who happens to be a part of the Russian intelligence establishment. Without knowing exactly what's involved, Dominika agrees to be trained as a Sparrow.

Working with director Francis Lawrence, who directed Lawrence in a couple of Hunger Games movies, Lawrence (Jennifer, that is) has no trouble portraying a powerful woman who learns to walk the fine line between convincing her superiors that she’s all in with the Sparrow program and trying to preserve some of her personal integrity.

That’s no easy task considering she’s working for a branch of the intelligence service that believes her body belongs to the state.

Added to the mix are an American CIA agent (Joel Edgerton) who offers Dominika a way out of her complicated predicament, Dominika’s hardened instructor in Sparrow World (Charlotte Rampling), another Russian intelligence agency big-wig (Jeremy Irons) and the head of Russian intelligence (an under-utilized Ciaran Hinds).

Much has been written about Lawrence’s nude scene, which reveals most (but not all) of an actress who certainly has the charisma and smarts to carry a movie that’s presumably trying to attain franchise status. Lawrence creates a bold, sexy character who's also capable of calculated bursts of fury.

Unfortunatley, Lawrence isn't enough to save the day. A convoluted plot, boiled down from a novel by Jason Matthews, results in an often murky spy drama enriched by a variety of locations — from Moscow to Budapest.

The movie attempts a somewhat tepid romance between Edgerton’s CIA man, a character who finds himself on the outs with the CIA after he blows his cover protecting a source. Edgerton gives a muted performance that dampens any sparks that could have enlivened his relationship with Dominika. p>
The movie's atmosphere isn’t one defined by virtue. Many of the characters are advancing personal agendas, notably, an American traitor portrayed by Mary-Louise Parker who has possession of floppy discs that both the Russians and Americans are eager to get their hands on.

There’s no point dwelling on a plot that generates too little suspense, but it should be noted that Red Sparrow includes a brutal scene of torture which many will find difficult to watch.

Downbeat and doom-struck, Red Sparrow doesn’t reflect the kind of intricate intelligence that defines spy movies adapted, say, from the work of author John LeCarre nor does it offer the brash pleasures of overstated action we associate with movies with blockbuster aspirations.

The result: A medium-grade thriller that relies on Lawrence and a reliable cast, but which comes off as watered-down and more than a bit weary.