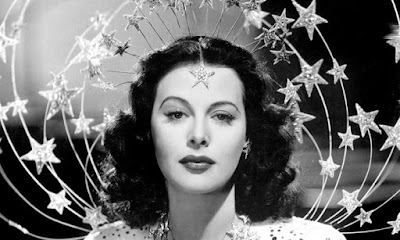 In the 1949 movie Samson and Delilah, Victor Mature (as Samson) told Hedy Lamarr (as Delilah) that her kiss had the sting of death. It was Lamarr's great beauty that made the line mildly plausible, even amid the melodramatic pomposity of a Cecil B. DeMille picture. Lamarr could be both irresistible and dangerous, a woman who knew how to use her beauty as a trap.

Of course, the great irony is that Lamarr, more than others, saw her beauty as a trap. She wanted to break through that trap -- and she found ways to escape the imprisonment of her image.

Not only was actress Lamarr one of the most beautiful women in the world, she -- along with avant-garde composer George Antheil -- invented a radio guidance system used by Allied forces to track torpedos during World War II. The system was based on frequency hopping, something that's still used in Bluetooth and WiFi -- or at least represented a necessary step in the development of these ubiquitous technologies.

Despite her notorious reputation (or maybe because of it), Lamarr began appearing in Hollywood movies: She immediately established herself as one Hollywood's great beauties, making films with stars such as Charles Boyer, Clark Gable, and Jimmy Stewart.

When the cameras weren't rolling, Lamarr found time to be married and divorced six times.

Sadly, Lamarr’s life eventually took a downward turn. She wound up living in New York City, a recluse whose face looked nearly deformed by a surfeit of plastic surgery. One wonders why this woman who felt caged by her beauty worked so hard to maintain it, but like many complicated figures, Lamarr was not without contradictions.

Credit Dean with having made an entertaining, informative documentary about a woman whose life never was anything less than intriguing.