Alicia Vikander takes over the role of Lara Croft in a movie that can't resist formula. 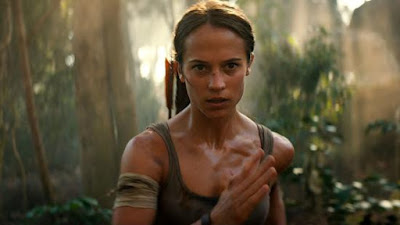 “Shoot him, Lara. We can’t let him get to Himiko.”
If this line of dialogue from Tomb Raider doesn’t arouse ripples of excitement for you, you may not be a candidate for the latest attempt to turn a video game into something more than an over-amped funhouse of formulaic plotting and so-so effects.

When the line was uttered by one of the movie's characters, I couldn’t help wishing that the Bill Murray of the Ghostbusters era were around to add a wry and preposterous comment. Murray would have known what to say about Himiko, a departed Japanese queen also known as the Mother of Death. Open her tomb and the entire world will be doomed.

The main suspense about this edition: Can Alicia Vikander replace Angela Jolie as Lara Croft, the intrepid tomb raider? Small in stature but buffed to the max, Vikander put me in mind of a gym-obsessed Tinkerbell who's motivated by a mixture of iron-willed determination, preternatural leaping ability and a growing commitment to combat evil.

Early on, I thought Tomb Raider — which has been directed by Roar Uthaug, the Norwegian filmmaker who brought us The Wave -- might be fun. And it is -- until the movie reaches the island where the notorious, 2000-year-old Himiko has been entombed.

The movie opens in the UK where Uthaug stages a nifty bike chase through the streets of East London. An independent spirit, Lara refuses to inherit the Croft fortune. She'd rather work as a bicycle courier.

Too bad Lara is stuck with the Croft heritage. Lara's father Richard Croft (Dominic West) left home to find the mythic tomb in the Pacific. Lara grew up with a mentor (Kristen Scott Thomas). Scott Thomas doesn't have much to do in this edition but she looks as if someone dipped her in white powder, denying her even rudimentary hints of a complexion.

It has been seven years since Richard launched his island adventure. He is presumed dead.

After a few plot manipulations, Lara -- not one to accept conventional wisdom -- decides to retrace her father's steps in hopes of finding dear old Dad alive on the island.

To achieve her goal, Lara travels to Hong Kong where she hooks up with Lu Ren (Daniel Wu), the son of the captain who guided Richard to the island where some terrible -- but as yet unknown -- evil might be unearthed.

After raging seas wreck Lu's small boat, Lara and Lu are stranded on the island where they're taken prisoner by Mathias Vogel (Walton Goggins), a slave-driver who claims to have killed Lara’s dad. Vogel has been searching for the tomb of Queen Himiko ever since. It's roughly at this point that the movie's fun begins to sour.

I’m not sure whether Tomb Raider can match the popularity of the 2001 edition of Lara Croft: Tomb Raider although it’s probably better than the 2003 sequel, Lara Croft, The Cradle of Life.

Tomb Raider leaves little doubt that it's meant to function as an origins story, setting up what the filmmakers clearly hope will be a healthy franchise life.

We’ll see about that: In the meantime, know that Tomb Raider pits Lara against fiendish foes, a storm-tossed sea, a towering waterfall and other dangers which confront her as the script by Geneva Robertson-Dworet and Alastair Siddons goes through genre motions that ultimately can’t totally mask the story’s hollow origins.

In short: Uthaug and Vikander can’t make good on the promise of vibrant early scenes. By the end, enjoyment has been overrun by formula -- at least it was by me.