A victim or is she really insane?

Claire Foy plays a woman institutionalized against her will in Unsane. Steven Soderbergh directs. 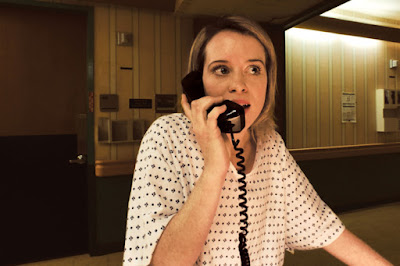 Filmed with iPhones by director Steven Soderbergh and built around a powerhouse performance by Claire Foy, Unsane offers moments that shock, unsettle and work on your nerves. And in playing a woman who's put through a physical and emotional wringer, Foy wipes out all memories of the dignity and composure she projected as Queen Elizabeth in The Crown.

Unsane also boasts a bit of head-spinning substance: The movie makes us wonder how we might go about defending our sanity if we suddenly were institutionalized, having mistakenly -- or so we believed -- been identified as a danger to ourselves and others.

Foy plays Sawyer Valentini, a banking analyst who's trying to establish herself in a new city. As the story develops, Sawyer is tested at the deepest levels. Unsane hardly qualifies as a small classic, but the movie wouldn't work at all if Foy had failed to communicate a sense of vulnerability and, just as important, a potential for violence.

After a disturbing incident with a man she picks up at a bar, Sawyer decides to see a counselor. She's fearful of being followed by a stalker. Why someone as capable as Sawyer would seek psychological help at an institution rather than in a more traditional setting -- the privacy of a psychiatrist’s office, for example -- never is made clear, one of several tests of the story's credibility.

An intake officer decides that because Sawyer has thought — albeit tenuously — about suicide, she should be admitted on a 24-hour-hold. Sawyer signs a few papers thinking that she’s signing up for counseling. Without realizing what she's done, she ascents to her own commitment.

Unsane functions on at least two levels. The first involves a social dimension: Is this institution committing people against their will in order to collect insurance money? When such monies run out, the supposedly insane suddenly become sane again. Mental health care becomes a profit-oriented scam.

On a second level, the movie pushes Sawyer to wonder whether she really might be insane. If all the people around you seem to be insane — why else would you find yourself in their company?

Working from a screenplay by Jonathan Bernstein and James Greer, Soderbergh effectively keeps us wondering about Sawyer for quite some time.

The story takes a turn toward horror when a new attendant (Joshua Leonard) shows up at the hospital. Sawyer accuses the attendant of being the man who stalked her in Boston, forcing her to move to Pennsylvania to escape his reach.

No one believes Sawyer, who finds only one ally inside the institution. Nate (Jay Pharoah), a man who has been committed for opiate addiction, has managed to smuggle in a cell phone which he shares with Sawyer.

Initially, Soderbergh’s use of iPhones gives the movie’s images an off-kilter feel that creates a mood of disconnection from the ordinary. Overall, though, I’m not sure there was a great deal of gain in making the movie this way — unless it was to keep costs to a minimum.

Despite some plot leaps that are difficult to swallow and a reveal that arrives too early, there’s enough in Unsane to keep it watchable, providing you don’t mind a surrender to horror-movie ploys before Soderbergh calls it quits.

I don't imagine that Unsane will be a major box-office performer, but it serves as a clear announcement that Foy is more than a regal presence. As Sawyer, she’s vulnerable, frightening and assertive. Her performance goes a long way toward saving a movie that isn’t always able to resist its less imaginative impulses.