In Israel, pain without comfort

Foxtrot devastates as it looks at a family dealing with loss.. 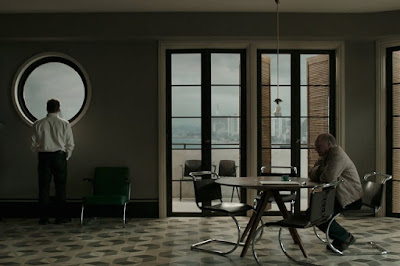 Sometimes, the buzzing sound of a doorbell changes everything.

Of course, it’s never the doorbell, really, but the chain of events that led to the announcement that someone was at the door -- in some cases, bringing bad news.

In the Israeli movie Foxtrot, the doorbell heralds the worst news. A couple living in Tel Aviv learns that their son, who’s serving in the military, has been killed in action.

The young man’s mother (Sarah Adler), the woman who answered the doorbell, passes out. She sees men in uniform and instantly knows why they've come. The young man's father (Lior Ashkenazi) refuses to reveal much, but he's clearly cooking up some angry, wounded stew that makes him compelling even though we don’t totally understand his reactions.

Sensing his pain, the man's dog draws closer and -- perhaps not understanding the depth of the man's tortured agony -- tries to nuzzle him. He kicks the dog. Hard. He'll allow himself no comforting touch.

After as painful an opening as any film you’ll see, Foxtrot director Samuel Maoz divides his film into three acts, each of which feels slightly abstracted from the ordinary flow of life, an approach that sometimes makes Foxtrot feel overly studied but which also tends to intensify each agonizing moment.

Maoz (Lebanon) creates an environment that feels self-contained but in which personal pain and guilt are stalked by Israel’s embattled political life, which largely and effectively remains off screen.

After a deeply unsettling look at how Ashkenazi’s Michael tries to cope (or not) with his son’s death, the Feldman family receives some shocking news. The Jonathan Feldman who was killed in action wasn’t their son after all. He was another young soldier with the same name. So sorry.

This news brings relief but also rage for Michael, who has been put through stress that connects him to the time of his own military service, memories he managed to push away with the successful life he's built as an architect.

The film then leaves Tel Aviv to introduce us to young Jonathan (Yonaton Shiray), a soldier who’s serving at a checkpoint that’s far removed from any active combat. Jonathan and three fellow soldiers try to fight boredom, mud, and rain as they stop the occasional car full of Palestinians or allow a lone camel to plod indifferently on its way.

It’s best not to describe what happens at the checkpoint, although you’d have to be awfully naive to think that these men will escape their situation without violence.

Whether we're in the modern apartment where Michael and his wife live or the strange outpost where the men take shelter in an empty shipping container that’s sinking inexorably into the softening earth, we’re in the company of characters immersed in a world of pain that leaves them mostly defenseless.

By the movie’s final act, the carefully organized, tastefully modern apartment of the film’s opening has turned into a chaotic mess, as have the lives of Michael and his wife Dafna. Ironies have quietly accumulated, the most potent of them only to be revealed later.

The meaning of the movie’s title becomes increasingly and devastatingly clear.

The box step of the foxtrot puts a dancer through prescribed motions and then takes that same dancer back to the spot where he or she started. The dance becomes a metaphor for futility.

In that sense, the Maoz’s eerily powerful movie follows people who are stuck in an insoluble and painfully absurd existential crisis.

One step forward. One sidestep. One step backward. Another step sideward. Everyone has moved. No one has gone anywhere. If the title hadn’t already been taken, the movie might have been called “No Exit.”