The movie features a surprising comic turn from David Oyelowo as a mid-level executive with the world's worst luck. 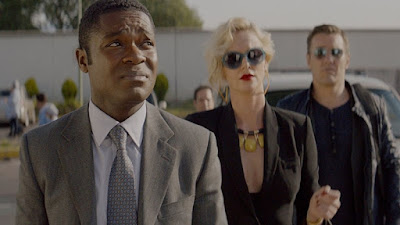 Another exercise in cynical comedy with a violent streak, Gringo includes at least one element we haven't seen before: A Nigerian businessman nicely played by David Oyelowo struggles to establish himself in a less-than-honorable segment of the US economy.

Overall, though, Gringo seems stuck in a genre rut that’s too familiar to any strike strong chords.

It doesn’t help that Gringo's purposefully convoluted plot revolves around a medical marijuana pill that a variety of different folks are trying to use for ill-gotten gains or that the screenplay involves the kind of strained cleverness that allows for apparently unrelated characters to crisscross.

It’s enjoyable to watch Oyelowo, still best known for having portrayed Martin Luther King in Selma, play a beaten-down chump who has piled up some major debt. His immigrant character, who believes in following rules, makes a perfect target for his scheming bosses at a Chicago-based pharmaceutical company, a duo played by Joel Edgerton and Charlize Theron.

As the story — most of which takes place in Juarez, Mexico — unfolds, director Nash Edgerton — Joel’s brother — introduces a variety of supposedly colorful characters, some of them outright duds. I'm thinking of a couple (Harry Treadaway and Amanda Seyfried) that works in a guitar shop. These two more or less stumble into the plot as does a predictably ruthless Mexican drug lord (Carlos Corona) known as The Black Panther.

Edgerton and Theron fulfill the movie’s dueling viper quotient with Theron giving her all as a woman for whom cunning, calculation, and profane insults come as easily as breathing. At one point -- presumably to show how callous her character can be -- the screenplay has Theron's Elaine do an impression of a deaf woman trying to speak. A line is crossed: An attempt to be funny makes you wince.

Also on board, Thandie Newton as the wife of Oyelowo’s beleaguered Harold, a woman whose infidelity constitutes a case of dramatic piling on.

But that’s the deal. Nothing goes right for poor Harold as the movie puts him through a half-serious, half-comic wringer that includes the arrival of the brother (Sharlto Copley) of Edgerton's character, a supposedly reformed mercenary who we first meet trying to straighten out his crooked life by doing volunteer work in earthquake-stricken Haiti.

Amusing in spurts, Gringo is easily shrugged off, probably because little about it seems plausible or pointed.