Vipers in the Soviet hierarchy

Laughs, terror, and dramatic punch mingle in The Death of Stalin. 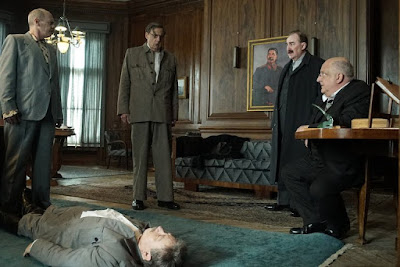 I can’t think of another movie exactly like The Death of Stalin, which is part of the reason this movie feels so unsettlingly original. Best known for creating HBO’s Veep, director Armando Iannucci gives us a movie in which farcical, dramatic, and satirical elements bump into one another with collision force. If The Death of Stalin ultimately qualifies as a comedy, it's one that refuses to allow us to drop our guards.

If you want an indication of just how daring Iannucci has been, consider this: He has cast Steve Buscemi as Nikita Khrushchev. Now, if you were to make a list of actors who might play the table-pounding former head of the Soviet Union, I doubt whether Buscemi’s name would have crossed your mind.

As it turns out, Buscemi does an impressive job portraying an aide to Stalin who eventually rose to a top position in the post-Stalin Soviet Union. Buscemi's wily Khrushchev has a sardonic streak that makes it clear that he's not about to be out-maneuvered.

The movie begins when Stalin (Adrian McLoughlin) dies at the age of 74, after an evening of gathering his top staff to watch an American western, a ritual they've endured many times before. After his evening with cronies and alone in his room, Stalin drops to the floor. He has just read a note wishing him dead that was sent by a favored Soviet concert pianist (Olga Kurylenko).

Before Stalin expires, we learn that he keeps a list of those he plans to kill — usually for capricious reasons or perhaps for no reason at all. The head of Stalin’s secret police Lavrenti Beria (a frightening Simon Russell Beale) executed (pun intended) Stalin’s orders with a particularly perverse relish. Beria was feared — not only by ordinary folks but by those in Stalin’s inner circle.

Iannucci obtains fine work from the actors who play members of Stalin’s coterie, a group that has been cowed into ceaseless expressions of admiration.

Michael Palin appears as Vyacheslav Molotov, a major Bolshevik figure who unwittingly managed to find his way onto Stalin’s feared hit list. Jason Isaacs has a wonderfully robust turn as Georgy Zhukov, a swaggering Red Army officer with a major World War II record. Jeffrey Tambor appears as Georgy Malenkov, an indecisive “yes” man who succeeds Stalin and who, like a frightened dog, keeps sniffing the air to see if something dangerous might be approaching.

Based on graphic novels by Fabien Nury and Theirry Robin, the movie brims with scorching dialog as the vipers try to navigate the choppy waters of intrigue that begin to roil after Stalin’s death.

It’s never certain which of these men will emerge from the conspiratorial muck. Gradually, it becomes clear that Khrushchev might out-maneuver the rest of the group. He reacts against the worst of Stalin’s excesses, favoring a modicum of reform by freeing political prisoners and putting an end to the hated hit list.

The clash between Khrushchev and Beria takes the form of an epic piece of internecine warfare; Khrushchev's no saint, but Beria's barbarous cruelty and child molestation stand as the corrupted core of Stalin’s insidious regime.

I’ve seen quotes describing The Death of Stalin as hilarious. I didn’t find it hilarious, although much of it is funny.

More importantly, The Death of Stalin is marked by an acute trenchancy, a look at men attempting to fill a sudden power vacuum in ways that illustrate the darker side of their ambitions. It makes us laugh, yes, but this is one comedy that's deadly serious.