Do we need a 'Death Wish' reboot? 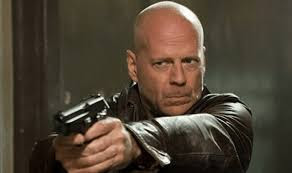 It has been roughly 44 years since the release of the original Death Wish, a vengeful bloodbath of a movie that played on widespread fears about urban violence. Charles Bronson starred as a vigilante who "made death wishes come true" for a variety of sneering miscreants.

When the movie was released, Vincent Canby, then the principal film critic of the New York Times, wrote this: "It's a despicable movie, one that raises complex questions in order to offer bigoted, frivolous, oversimplified answers."

Roger Ebert awarded the movie three stars, crediting it for creating "eerie fascination" but also pointing out that Death Wish was "propaganda for private gun ownership and a call to vigilante justice."*

Now comes director Eli Roth's remake starring Bruce Willis. Roth moves the story from New York to Chicago and converts the movie's vigilante from an architect to a surgeon. He also loses anything you might call "eerie fascination" or any other qualities that might be called redeeming.

For those who are unfamiliar with this hoary revenge-fest, it goes like this. A physician and his wife (Elizabeth Shue) are living a happy life in Evanston, Ill. when their home is burglarized by three thugs, a crime that results in the death of the doctor's wife. The family's teenage daughter (Camila Morrone) is also wounded. She winds up in a coma.

Willis' Paul Kersey and his brother (Vincent D'Onofrio) are, of course, inconsolable. Kersey was at work at the time of the burglary, and, therefore, believes he failed in his manly duties to protect home, hearth, and -- of course -- the women in his life.

A couple of Chicago detectives (Dean Norris and Kimberly Elise) are sure they'll catch the killers, but the wheels of justice don't seem to be turning fast enough for Kersey, who -- in this mildly updated 21st century edition -- even visits a therapist.

Frustrated and grief-stricken, Kersey decides to pick up a gun. His actions earn him a nickname: He's the Chicago Grim Reaper, a man who kills only those who deserve punishment. Among the Reaper's victims, an inner-city drug dealer who goes by the name of Ice Cream Man.

Instead of creating sickening urban exploitation, Roth treats audiences to an equally dubious helping of what might be deemed "gun fun," sometimes adding comic spin to the movie's abundant violence. Presumably, we're meant to find visceral satisfaction in Kersey's forays into the night as he dons a hoodie and takes justice into his own hands. Of course, he also hopes to find his wife's killers.

Roth, who has directed horror movies such as Cabin Fever and Hostel, needs no introduction to gore and he dishes out plenty of it, including a gruesome torture sequence in which (spoiler alert) Dr. Kersey slices open a miscreant's sciatic nerve.

Only violently expressed vengeance seems to snap Kersey out of his grief and depression. His vengeful rampage makes him feel better, and his behavior lights up talk radio airwaves as callers are encouraged to debate whether he's a "zero or a hero."

Death Wish has less to say about the agony of grief than about the supposed thrill of rapid gunfire. Moreover, a DYI attempt at dispensing justice by a well-educated white man seems especially tin-eared in the post-Trayvon Martin era. Add Parkland and a heated national conversation about guns and who should wield them, and the movie becomes even more reprehensible.

I'm not sure we ever needed a Death Wish reboot, but we sure as hell don't need one now.

*Thanks to Rotten Tomatoes for the ability to quickly check reviews on older movies.

I've always enjoyed your reviews and the film expertise you possess. This may indeed be a lousy film. But current events should not be the reason to dismiss a film. This film makes you think of a mass school shooting or Trayvon Martin? How about the Connecticut doctor whose wife and daughters were raped and murdered while the police waited outside? I realize most critics veer way to the left on most issues, but if you can't see that gun owner ship is a result of cops not protecting and just showing up after the fact, (I'll use your own example-Parkland, where the cop waited outside) then you really shouldn't even bother reviewing a film like this. You know before you even go in that you will give it a negative review.

Current events were simply a kicker for what certainly qualifies as a bad movie — with or without reference to real-life issues. You’ll notice I ddin’t mention Parkland until the end of the review. I’m not sure what you’re trying to say with the examples you mentioned. Do you believe that it’s acceptable to take the law into your own hands to punish those who commit crimes? There’s a difference between defending oneself and seeking revenge or trying to be a self-appointed arbiter of justice. The issue isn’t gun ownership, it’s vigilantism. As for knowing what I’d say before I see the film, you’re wrong. I’m not saying I expected “Death Wish” to be great, but I try to approach every movie with an open mind. There are ways that “Death Wish” could have been a decent film, but it’s not my job to rewrite the movies I see.

This was a good review, but I have to say I'm perplexed about how it's been reported on RottenTomatoes--you're listed as giving it a fresh rating. The pull quote of the last sentence in your review didn't seem that positive, so I came to see what you'd said. It seems you may want them to change the fresh tomato to a splat.

Strange how the critics rating is 15% and regular moviegoers are at 84% - can you say out of touch?