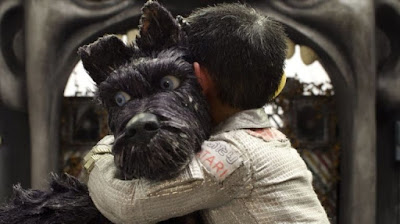 I’m not a total fan of Wes Anderson, the director whose work includes The Fantastic Mr. Fox, The Grand Budapest Hotel, Moonrise Kingdom and The Darjeeling Express). But there’s no arguing that Anderson is one of the few directors working today who follows his imagination wherever it leads him. To enjoy his movies, you must accept his apparent unwillingness to curb his idiosyncrasies or to tailor his work to popular expectation. You must accept -- and perhaps even welcome -- what feels like the willed insularity of Anderson's world.

In Isle of Dogs — Anderson’s latest — the director employs stop-action animation to create a story in which a Japanese mayor banishes all the dogs in his city to an island where the city dumps its trash.

Every dog lover will recognize this as a horrible situation and Anderson doesn’t shrink from the inherent sadness of a society so cruel that it condemns a species that has done nothing to deserve being ostracized.

The city's authoritarian Mayor Kobayashi (voice by Kunichi Nomura) -- a lover of cats -- takes a sadistic approach to an epidemic of dog flu that turns once faithful companions into health hazards. Totally committed to his own power, Kobayashi refuses to change his mind even when a researcher develops a serum that will cure every flu-carrying pooch.

Although it feels all of a piece, Isle of Dogs is a linguistic mash-up. The abandoned dogs speak English and the Japanese characters speak Japanese (no subtitles). There's also an American exchange student who, of course, speaks English. A reporter for a high school newspaper, she crusades to topple Kobayashi's rule.

Cranston’s mangy Chief may be the most distinctive of the dogs. A stray who doesn’t believe in trying to please humans, Chief warns others that he's not afraid to bite.

Sometimes when I watch an animated movie I can’t help trying to visualize the human actor behind the animated character.
Cranston’s voice is unmistakable, but — for the most part — I forgot about who might be doing the voice work and immersed myself in the visual environment Anderson and his team so ably create.

Anderson bows to Japanese film culture — often in humorous ways. At one point, for example, he employs a bit of the score from Akira Kurosawa's Seven Samurai as a wry commentary on the action.

I wouldn't call Isle of Dogs a kids' movie, although it centers on 12-year-old Atari (Koyu Rankin), a boy who steals a small plane, crashes on Trash Island and winds up helping to rebuild a bridge between dogs and humans.

One question seems unavoidable: Does Anderson’s movie have a seriously deep meaning? Is it an allegory or simply another display of Anderson's eccentricity?

I’m not sure where I stand on the question, an uncertainty about Anderson's work that has bothered me before. But I also find his artistic expressions personal and intriguing, full of small touches that can be as pleasing as the film’s overall design.

Toward the end of the movie, a dog and his new family are served heaping bowls of red meat, something of an apology from the previously abusive humans. Each puppy gets the same food -- only in tiny bowls. I’m not entirely sure why this detail made me smile. Perhaps because it’s emblematic of Anderson's approach, placing irresistible bits of minutiae against backdrops that seem to have been created with something that might be called "cockeyed control."