Trying to conquer a virtual world

Steven Spielberg brings plenty of visual spark to Ready Player One. The story? Less than spectacular. 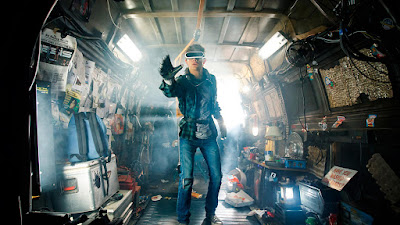 Why are so many in need of so much escapism? Because the movie takes place in the dystopian year of 1945 and reality sucks: Suffering from all manner of deprivation, folks are forced to live in the Stacks, trailers piled atop one another in tenement fashion.

Not surprisingly, the downtrodden residents of Columbus, Ohio -- the movie's main real-world setting -- don headgear and special gloves as they try to experience excitement through personal avatars that travel around a virtual universe known as the Oasis.

Speaking for myself, I’d put it this way. In Ready Player One, the side trips are significantly more rewarding than the main story, which puts a youthful resident of Columbus (Tye Sheridan) in the middle of a high-stakes video game inside the Oasis.

Sheridan's Wade Watts -- make that his avatar Parzival -- sifts through clues as he searches for three keys. Should Parzival acquire all three, Wade will inherit ownership of the Oasis, thus saving everyone's favorite synthetic playground from the clutches of IOI, an evil corporation that wants to monetize the Oasis experience. A greedy corporate shark (Ben Mendelsohn) runs IOI.

I should point out that these side trips really are the point of a movie that tells a story that never seems all that momentous. Minute-by-minute, the stakes in Ready Player One feel significantly higher than what happens at the end of the movie's 140 minutes.

It’s also possible to look at Ready Player One as Spielberg's chance to command a broad swath of the pre-summer market. Visually sophisticated and full of invention, the movie harkens back to one of Spielberg’s career sweet spots: the 1980s.

Conveniently, James Halliday (Mark Rylance) -- the man who designed the Oasis -- was deeply immersed in ‘80s popular culture, so much so that he loaded his virtual creation with references to it. You'll find nods to Back to the Future, The Shining (one of the movie’s best and most amusing set pieces), Duran Duran and … oh, well … you get the idea. There's lots of '80s stuff.

When the story kicks off, Rylance's Halliday, who set up the game in the first place, has been dead for five years. A skilled Oasis gamer, Wade wants to own the Oasis, not just for himself but for all who would resist IOI's insidious corporate intrusion into everyone's personal headspace.

Inside the Oasis, Wade meets Art3mis (Olivia Cooke), a sexy, spunky avatar who immediately captures his heart. He also has other virtual allies, notably the gruff but inventive Aech, a giant-sized man who looks like he wandered into the movie from a Marvel Comic.

Some of the movie's action is fun, notably an early-picture car race that Spielberg mounts with tipsy fury. Imagine speeding along a road when the road suddenly comes to an abrupt end or when King Kong leaps off a building and tries to crush your vehicle.

For me, Ready Player One's third — and needlessly protracted final act — took a bit of the gleam off the movie’s virtual shine. Spielberg brings real life and virtual reality together. Real-life gamers must meet people they've known only as avatars. All of this builds toward massive battles as Wade seeks his triumph. Really? Noisy battles are the best the movie can do?

As difficult as it must have been to create Ready Player One's teeming visual environment, it’s also true that the movie lacks the sophisticated spin of the best sci-fi, something that couldn’t be said of Spielberg’s work in A.I. or Minority Report.

In the end, Ready Player One predictably endorses reality over virtual fantasy, although almost nothing about the movie suggests that anyone involved with this massive project really believes that.

Obviously, Spielberg is no slouch when it comes to handling gigantic projects. He keeps the action coherent, jams images with information without getting lost in them and propels his characters through the movie's effects.

So enjoy the side trips for as long as you can. This is one movie in which the ride definitely beats arrival at the final destination.