A movie that can't match an extraordinary life 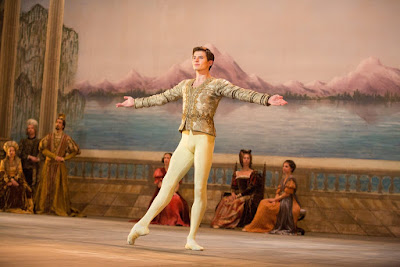 Actor Ralph Fiennes again moves behind the camera to direct The White Crow, the story of ballet dancer Rudolf Nureyev. But rather than soaring, his movie slogs, perhaps because an extraordinary life deserves an extraordinary movie. Structurally choppy and unevenly acted, The White Crow seldom gets beyond adequate.

Aside from his dance career (or perhaps in conjunction with it), Nureyev became an international celebrity after defecting to the West in 1961. Regarded as one of the premier male dancers of his day, Nureyev turned his back on the Soviet Union while touring with the Kirov Ballet in Paris.

In the White Crow, Fiennes touches on various incidents in Nureyev's life. But he doesn't infuse his movie with any overriding point of view about artistry, politics or even the world of ballet.

Burdened by flashbacks to Nureyev's childhood, the movie features a Nureyev played by Ukrainian dancer Oleg Ivenko. Ivenko's Nureyev comes across as a vibrant, assertive young man with a killer stage presence that sometimes made up for a lack of technical polish, at least in the dancer's early years.

Working from a screenplay by playwright David Hare, Fiennes treats Nureyev as kind of "it" boy of the dance, a sexually fluid young man who begins to discover the world in Paris, making frequent trips to the Louvre. He also immerses in Parisian nightlife, usually in the company of the young woman (Adele Exarchopoulos) who eventually helps stage Nureyev's defection, which takes place at a Paris airport and constitutes the film's high point.

Fiennes himself makes an appearance as Alexander Pushkin, Nureyev's Leningrad-based instructor who's something of a sad sack, a less-than-charismatic soul. Recovering from an injury, Nureyev moves in with Pushkin. The proximity leads to an affair between Nureyev and Pushkin's wife (Chulpan Khamatova), not exactly the best way for a young dancer to thank his mentor.

The movie gets close to a subject that needed more examination: the complex relationship between Nureyev and a Soviet minder (Aleksey Morozov) who has difficulty reconciling his duties (preventing defections) with Nureyev's free-spirited nature.

Fiennes includes dance sequences that reflect an appreciation of dance by doing what should have been done throughout the entire movie: Dances are mostly presented whole, not chopped into bits that disrupt the narrative flow.

The White Crow also touches on Nureyev's bisexuality. (He died of AIDS in 1993.) And as portrayed by Ivenko, it's clear that Nureyev may have thought that his talent justified his self-involvement. He didn't seem to think much about others.

The movie seems to assume that we already know that Nureyev was a major figure in dance. Lacking, however, is a feeling for the fascination that brought Fiennes to this project in the first place. Too much of the time, The White Crow is a movie without a sense of the imperative.