Shakespeare finds no peace at home

Kenneth Branagh's All is True speculates about the life of The Bard. 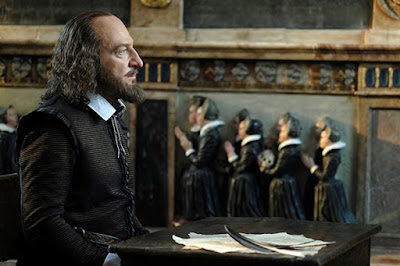 After a fire destroyed the Globe Theater during a 1613 production of Henry VIII, William Shakespeare decided to leave London's glare, put down his quill and spend the rest of his days in the company of his family. Sounds good, no? Of course, not.

In the hands of director Kenneth Branagh, who also plays the aging Shakespeare, The Bard's years in retirement are anything but trouble-free. He's deeply aggrieved over the death of a son he mostly neglected. His wife (Judi Dench) is older than he and treats him with what might be called warm tolerance. His daughter Judith (Kathryn Wilder) misses no opportunity to express her anger at him and another daughter (Lydia Wilson) has married a doctor (Hadley Fraser) whose uptight Puritanism gets on Will's nerves.

In short, the Shakespeare home is anything but peaceful in this speculative bit of fiction about the waning days of the greatest writer ever to put pen to paper.

Under such unruly circumstances, what's a bard to do?

Well, he must ward off potential scandals, manage his finances and deal with a wife who knows that his highly regarded love sonnets probably were not written for her.

All of this sounds intriguing, but Branagh's All Is True winds up sounding as if Ben Elton's screenplay was heavily influenced by modern sensibilities that resulted in dialogue that might have made Shakespeare wince.

The film's title derives from a scene in which an impatient Shakespeare, evidently fed up with being asked the same questions again and again, tells a would-be writer that if he explores the depths of his imagination and produces a work that reflects such depth, it will be true -- and that, in the world of fiction, anything that emanates from such a place must be true.

Is this Shakespeare or self-help?

This is not the only instance of uncharacteristically blunt speech in which Shakespeare and his squabbling family engage. Some of Judith's verbal assaults on a father who cherished his son but gave his daughter short shrift also have a contemporary ring.

With a receding hairline and an artificially extended nose, Branagh gives us a beleaguered Shakespeare who is much criticized by his family for having spent his time in London, ignoring his kin and wrapping himself in his career as a poet and dramatist.

I would have thought that Branagh, no stranger to Shakespeare, might have done better, and I would normally say that All Is True proves marginal or at least that viewing might easily be delayed until the movie is available through one streaming service or another.

But there's one scene that burns itself into memory.

Shakespeare meets with Henry Wriothesley, a.k.a, the 3rd Earl of Southhampton. Wriothesley, thought by many to be the Fair Youth of Shakespeare's sonnets, tries to convince Shakespeare that, as the greatest writer who has ever lived, he might be a touch less concerned about what his neighbors think about him.

Ian McKellen portrays the aging Wriothesley, a man no longer fair or youthful. McKellen adds something that has been missing throughout, a sense of sorrow, grandeur and Olympian intelligence delivered by an aristocrat who can see the finish line and who knows precisely where he's been. The Earl's biography resides in every shaded corridor of McKellen's face and in every inflection of his voice.

This is not to fault Branagh or the other actors, but to note that despite the revelation of family secrets and the march toward a big scene in which Shakespeare must face a truth that undermines his reality, it's McKellen who gives the movie its moment of pure transcendence.