The long voyage to nowhere

In this Swedish movie, space is not the final frontier; it's a punishment. 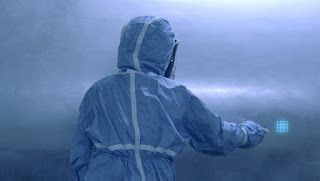 Not known for sci-fi movies, Sweden enters the fray with Anaria, a movie with a space-travel premise and a depressive soul that could have been channeled from the movies of another Swede, Ingmar Bergman. The story takes place aboard a spacecraft that begins a 23-day voyage to Mars. The passengers plan to start anew, the Earth having been ravaged. But a collision with space debris throws the craft off course. So begins a journey toward nowhere. The story centers on a character called MR (Emelie Jonsson), a woman who works in the part of the ship where passengers experience hallucinatory trips through their own memories, many involving Earth before whatever apocalypse made it uninhabitable. Directors Pella Kagerman and Hugo Lilja nicely establish the onboard environment, a cross between a shopping mall and a theme park that seems to have been designed by someone for whom consumer friendliness had become a religion. When things go wrong, the story works its way through a variety of problems that hinge on the ability of the crew and its captain (Arvin Kananian) to maintain hope. But the vast emptiness of space makes a mockery of hope, particularly when course correction efforts must be measured in years. The directors do a good job presenting the slow unraveling of both the onboard environment and the ship's many passengers. Alliances come and go. A cult forms. MR establishes a relationship with a female crew member. Imagine an entire goalless lifetime in which you’re adrift in an unfathomably large cosmos. Sound familiar? If so, it’s because the movie clearly has deep philosophical ambitions. Anaria gets its ideas across but doesn’t make them as deeply felt as material such as this probably requires. The film’s final image comes close to being haunting, but the entire idea of a going nowhere generates a bit of inherent boredom that sometimes clouds the journey.
Posted by Robert Denerstein at 4:10 PM