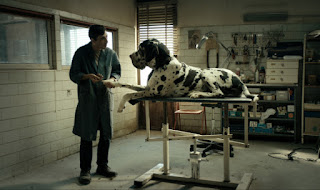 Marcello (Marcello Fonte) earns his living grooming dogs. But in the rundown Italian coastal town where Marcello lives, this simple occupation may not be enough to support an estranged wife and a young daughter. So Marcello occasionally sells cocaine. The great irony of director Matteo Garrone's Dogman centers on Marcello’s personality. Cocaine or no, he hardly seems a typical gangster. He's a simple, good-hearted fellow who tries to get along with everyone, including the town bully (Edoardo Pesce). Pesce's Simone becomes a kind of one-man scourge, attacking people, destroying property and generally terrorizing the town's residents. He's so much a nuisance that one of the town’s businessmen go so far as to propose that an assassin be hired. As the story unfolds, Garrone (Gomorrah) turns Marcello into an unfortunate sap whose innocence and rudimentary sense of honor only add to his troubles. Garrone’s narrative builds toward an explosive ending that leaves Marcello alone and abandoned against the decaying landscape of the town where he has tried so hard to fit in. Those familiar with Garrone's work will be tempted to read metaphorical meanings into a simple tale that takes place against a backdrop of ruined buildings. As we follow Marcello's story, hope gradually gives way to feelings of abandonment. Marcello displays sweet affection for dogs and for his daughter. Even so, Garrone refuses to see life in Italy (and perhaps beyond) through a lens tinted by optimism. In Dogman, Marcello’s love for others goes largely unrequited.

Rather than try to explain Charles Manson, director Mary Harron's Charlie Says concentrates on Manson’s spell-binding relationship with the women who ultimately carried out or abetted him in the Tate/LaBianca murders, endlessly discussed crimes that left an indelible mark on American culture. The movie focuses on three women: Leslie Van Houten (Hannah Murray), Patricia Krenwinkel (Sosie Bacon) and Susan Atkins (Marianne Rendon). After immersing in the cult-like atmosphere of the Manson family's California commune, Harron brings us to the murders. She follows the carnage with a lengthy section in which a teacher (Merritt Wever) tries to help each of the women -- by then imprisoned in maximum security -- achieve some degree of self-realization. Perhaps this is where the movie should have started. At it stands, Harron (American Psycho) doesn't provide a compelling enough reason for taking another drive through Manson country. And without more context, the free-floating atmosphere of the '60s -- manifested mostly through sex, drugs and the charisma Manson (Matt Smith) supposedly projected -- seems a trifle ridiculous. Last week, I wondered whether we needed another film about Ted Bundy (Extremely Wicked, Shockingly Evil and Vile). I had my doubts, but in this case, it seemed clear that Charlie Says doesn't offer enough by way of insight to answer the question that inevitably seems to arise with movies about heinous crimes, particularly those that already have been the subject of enough books and movies to qualify as an industry: Exactly why am I watching?