Can he be saved from death row 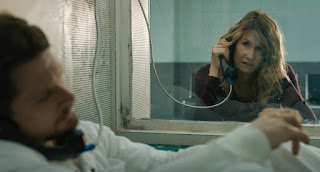 Director Edward Zwick takes a direct hit at capital punishment with Trial By Fire, a drama based on the real-life story of a Texas man who was sentenced to die for a heinous crime. Todd Willingham was convicted of starting a fire in which his three children died.

Zwick serves up the drama in three acts. In the first, we meet a Texas couple, a low-down George and Martha -- Willingham and his wife (Emily Meade) -- who engage in no-holds-barred screaming matches, some of which turn physical.

Tragedy strikes early. Willingham wakes up one morning to discover that his house is on fire. When he can't save his children from the blaze, he winds up being charged with arson and murder.

At Willingham's trial, Zwick exposes gaps between the facts of the case and the testimony of police, witnesses, and experts. To make matters worse for Willingham, his alleged crime is viewed as horrible enough to deprive him of any public sympathy.

The movie's third act takes place in a Texas prison where Willingham awaits execution on death row. Still seething with anger, he fights with other inmates but insists on his innocence.

Late in his 12-year stay on death row, Willingham encounters Elizabeth (Laura Dern), a woman with whom he begins a correspondence. Initially wary, Elizabeth soon sets out to prove Willingham's innocence, a task that puts her in touch with key players who helped put Willingham on death row.

All of this plays out in ways that make the movie feel longer than its two hours, perhaps because Zwick digresses with flashbacks and because some parts of the story unfold independently of one another.

It’s no spoiler to tell you that Zwick ultimately takes a shot at Texas-style justice and the state's then Governor Rick Perry. He also designs the movie to show one of the major flaws in the argument for capital punishment. Death sentences can involve overzealous police work, shoddy defense counseling, and corrupted witnesses. Valid arguments, of course, but they give Trial By Fire a position-paper aura.

O’Connell and Dern give fine performances, as does Meade, as Willingham's wife. Zwick (Glory, Blood Diamond and The Last Samurai) has an eye for a good story. But heavy-handed didacticism makes parts of Trial By Fire feel rigged, costing the story some of its power. As a result, Trial By Fire's anti-capital punishment stance most likely will speak only to the already converted.