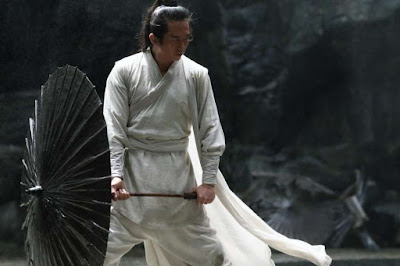 It's arguable that Zhang Yimou, who made his reputation as part of China’s vaunted fifth generation of filmmakers, never has equaled the achievement of some of his early work: movies such as Red Sorghum (1987) Ju Dou (1990) and Raise the Red Lantern (1991).

A series of smaller, less formally structured movies such as To Live followed Zhang's international breakthrough. Then, he shifted gears. In 2002, he released Hero, a martial arts spectacle. Now comes Shadow, Zhang's latest costume/martial arts drama, a darkly hued epic in which heightened moments of intrigue play against fight sequences that are vivid, memorable and inventive.

Some rightly have seen the movie as a return to form for Zhang after 2016's deeply miscalculated The Great Wall, which starred Matt Damon as a white warrior battling monsters on (what else?) The Great Wall.

Set during China's Three Kingdoms period, Shadow pits rival factions in a battle to control a city that will cement the unity of the Kingdom of Pei. An insufferably egotistical and apparently incompetent leader, the king of Pei (Zheng Kai) wants peace at any price. He refuses to engage the other side in combat, even after its leader insults the king’s sister (Xiaotong Guan) by proposing that she become a concubine for his son.

Such is the story’s framework, but the spine of the tale involves the king’s main warrior, Commander Yu (Chao Deng). Gravely wounded in a battle that precedes the movie, the Commander wants to fight the foe for possession of the city of Jing. But — and here’s the plot’s main twist — the Commander is a doppelganger, a peasant selected by the real Commander who has been too weakened by battle wounds to carry on. Chao plays both roles.

The ruse forces Yu to feign a relationship with the Commander's beautiful wife (Sun Li), a woman known for playing zither duets with her husband. Not surprisingly, the double begins to fall for the Commander's wife, a woman he tries to keep at a distance.

Seasoned with high-toned melodrama and a purposefully exaggerated performance style, The Shadow builds toward an incomparably presented siege of Jing featuring images that are unlike anything I’ve seen before, including the use of umbrellas that open into a whirl of lethal blades. Zhang also offers an ingenious take on warfare's fabled Trojan Horse.

But it’s not just the weapons that make victory possible, it’s a martial arts move discovered by the general’s wife, a sashaying maneuver that adds thematic heft. Based on distinctly feminine gestures, this signature martial arts move looks almost comical when executed by men. No matter: Defeat can be avoided only if the feminine and masculine are conjoined.

The Shadow lies somewhere between the grandeur of Shakespeare and the melodrama of Douglas Sirk, but the movie emerges as a visually towering work, perhaps even a fertile middle ground between Zhang’s earlier and later efforts. Searing battles bolster an intimate drama about power grabbing at the royal court.

Now 69, Zhang fuses spectacle and drama in a work that brims with intrigue and visual invention and reminds us what can happen when a master makes a movie that's steeped in conflicts so grand they feel as if the world's entire order hangs in the balance.