They con their way to laughs 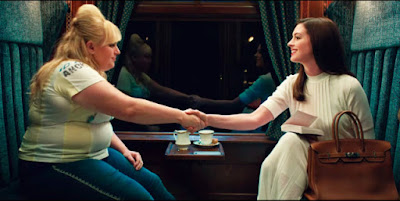 The Hustle -- a comedy starring Anne Hathaway and Rebel Wilson -- remakes 1964's Bedtime Story, a movie that itself was remade as 1988's Dirty Rotten Scoundrels, a much-praised comedy that starred Michael Caine and Steve Martin. Clearly, the aim here was gender reversal with women taking the lead as dueling con artists locked in a competition meant to tax all their felonious skills.

The comedy derives from a classic oil-on-water clash of personalities that are embodied in Wilson's unashamedly crude Penny and Hathaway's ostentatiously sophisticated Josephine.

Though uneven and burdened by a coda that works against the movie's feminist tilt, the comedy benefits from three attributes: An inviting setting -- Beaumont Sur Mer (a fictional town on the French Riviera) -- and two all-in performances from Hathaway and Wilson.

The con jobs carried out by these women aren't especially convincing and a major gag (Wilson's character feigns blindness) flirts with questionable taste, but Hathaway and Wilson work well together and there are enough chuckles to satisfy amusement-hungry appetites.

The story revolves around a competition in which the two women, who are battling for possession of the same luxe turf, try to con a young app developer. Alex Sharp brings gee-golly innocence to his portrayal of a tech whiz with money.

The big gags sometimes feel like examples of sketch humor dropped into the story. At one point, the women wrangle high-priced engagement rings from various marks -- notably, a Texan played by Dean Norris. Penny poses as Josephine's crazy sister, a mad woman who purportedly accompanies any marriage to the lustrous Josephine. Once exposed to Penny, the enticed fiances can't flee quickly enough.

Director Chris Addison doesn't seem to be chasing cinematic history; the movie makes no attempt to conceal its escapist impulses, so even if The Hustle fails to enter the pantheon of great comedy, it proves reasonably entertaining. Moreover, its two stars manage to dispel the aroma of familiarity (what another con-job movie?) that could have put a choke-hold on their efforts.