'Aladdin' -- neither detestable nor wonderful

Disney's live-action version of its 1998 animated smash climbs on a magic carpet but doesn't soar. 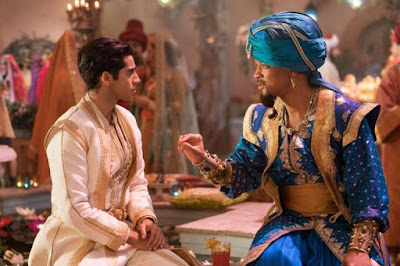 Will Smith has been assigned the unenviable task of trying to do what Robin Williams did for the 1992 animated version of Aladdin; i.e., turn Disney's latest live-action remake into a monster hit. I’m not sure that the live-action version of Disney's take on a fabled tale from the Arabian Nights will be a box-office smash, but credit Smith with not flinching at taking the role of the fabled genie. He's the life of what can be a tepid party.

As for the rest of Aladdin, call it a mixed bag of garish colors, cliched applications of anything that might be called “Arabian” and musical numbers that often sound as if we've heard them before, probably because we have. Most of the tunes were in the animated version and, for the most part, are presented here without scoring bullseyes.

The story remains generally unaltered, although Disney has adjusted the proceedings to add a bit of ethnic flavor, more or less in the way that blush is applied to a pale cheek. Aladdin, the market thief who aspires to be a prince so that he can win the hand of a princess, is played by Canadian actor Mena Massoud. Princess Jasmin is portrayed by Naomi Scott, who sells her songs with ease and who occasionally even looks as if she might be an animated character who has sprung to life. Marwan Kenzari portrays the villainous Jafar, the conniving vizier who wants to replace the kindly Sultan of Agrabah (Navid Negahban).

Guy Ritchie, who made a splash in 1989 with Lock, Stock and Two Smoking Barrels, who directed Robert Downey in a couple of Sherlock Holmes movies and who directed the epically awful King Arthur: Legend of the Sword, takes the reins. Ritchie manages the movie's special effects, CGI creatures (notably a pet monkey named Abu) and makes the most of Smith’s genie, a blue muscleman whose lower half consists of puffs of swaying smoke.

The movie's best set piece involves the arrival of Aladdin and a large entourage at the court. Aladdin masquerades as Prince Ali so that he can conform to local law. The princess, we’re told, only can marry a prince.

The princess’s handmaiden (Nasim Pedrad) adds welcome conspiratorial girlfriend flare and eventually becomes a love interest for the genie, whose greatest desire is to escape his lamp and become an ordinary human.

At times, the movie has a garish Bollywood flavor, leaning heavily on splashy colors and costumes, outsized turbans and ornate interiors that look like more costly descendants of the kind of faux international settings Bob Hope and Bing Crosby used to traipse across in their road movies.

I found Massoud’s Aladdin to be a bit bland; Scotts’s Jasmine -- more assertive in this version -- proves better and, as stated, Smith’s Genie basically leads the way to the happily-ever-after conclusion the tale must have.

Ritchie's rendition of a Disney cash cow may not be the kind of magic carpet ride that transports you to entertainment's most magical realms, but if there must be live-action remakes of animated movies, I suppose this one suffices.