A teen comedy with smart twists

In Booksmart, two high school seniors challenge themselves to leave the library -- and party. It's not as dumb as you might think. 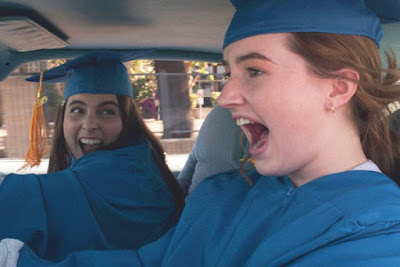 It’s easy to see why the teen comedy Booksmart took the recent SXSW film festival by storm, garnering big laughs from audiences and early raves from critics. The movie, which marks actress Olivia Wilde’s directorial debut, fires a high energy rocket of comedy that proves infectious, even when the individual bits aren't working.

For those of us for whom high school no longer captivates, Booksmart may carry sociological weight. After a preview screening, a young woman -- much closer to high school than I -- said that Wilde had caught something true about today's high school experience. I'll take her word for it.

Though not the first of its kind, the movie gives teen comedy a feminist spin and a muted testosterone quotient. That doesn’t mean Booksmart isn’t raunchy; it just means that Wilde, working from a screenplay credited to a quartet of writers, gets the most out of her two stars (Beanie Feldstein and Kaitlyn Dever) and the well-selected problems with which she confronts them.

A shade short on sensitivity, Booksmart makes smart use of an unusual twist. The two main female characters — both brainy and one gay —- have spent their school years conforming to every cliched standard they could find. Their goal: to march triumphantly through the world of high-scoring SAT elites who are destined someday to run the country — or so they think.

When the movie begins, Feldstein's Molly already has been accepted to Yale; Dever's Amy will head to Columbia after a year-long stint of resume-building, do-gooder work in Botswana.

But achievement hasn't made Molly feel secure enough to do without the self-affirmation tapes that begin her day. And Amy, upfront about her gayness, is clueless when it comes to any real sexual encounters. Molly, by the way, isn't much better at reading hetero cues.

These young women have more than met expectations. But here's the rub: While Molly and Amy were hanging out in libraries, their classmates were having fun. And guess what? Most of the classmates who these nose-in-the-air teens have been deriding are on success tracks, as well. They’re either headed to great colleges or have found other ways to make an impact.

Feeling cheated, Molly and Amy vow to make up for the lost time in one night. They’ll find the best party and hit it hard.

Of course, lots goes wrong as the young women try to earn their party credentials. To begin with, they don’t know the location of the school’s purported best party. Moreover, their search for the ultimate party leads to many mistakes, including one that involves them with the school's rich kid (Skyler Gisondo). Nobody likes Gisondo's Jared, partly because he pushes so hard to be everyone's friend. Gisondo's Jared hangs out with a free-spirited girl (Billie Lourd) who Amy and Molly can't figure out.

Molly and Amy also are steered toward a party hosted by the school’s ultra-pretentious drama club before winding up at the party they wanted to attend in the first place. Noah Galvin and Austin Crute play the school's drama nerds.

There aren't many adults in view. Jason Sudeikis appears as a teacher who finds himself in an unexpected encounter with the two girls and Jessica Williams portrays a teacher who encourages the girls in their party pursuits.

I don't want to oversell Booksmart, but it’s a cut above the usual teen junk and Feldstein and Dever give winning performances before the movie concludes with a ringing endorsement of friendship and delivers its message: All work and no play makes for two insufferably successful girls and, perhaps more importantly, not everyone is the person you think they might be -- even in high school.