Keanu Reeves returns as the assassin who fights for his own survival in Chapter 3 of a series that's propelled by well-choreographed violence. 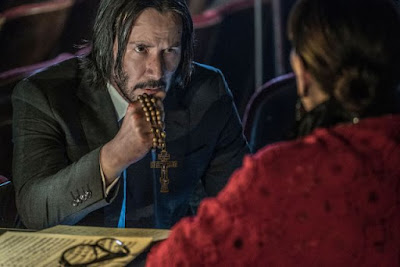 I'm not sure that John Wick has entered the highest ranks of iconic action characters, but he sure qualifies as one of the breed's most violent. If Keanu Reeves, who plays Wick, were paid by the number of dead bodies his character leaves in his wake, he'd be one of the richest men in Hollywood. In John Wick: Chapter 3 -- Parabellum, Wick's assailants fall like swatted flies.

Here's the Wick drill: Run. Pause. Put a gun to the head of an opponent. Fire once. Move gun. Fire again. Run some more. Repeat. And that's only the film's first half hour.

Directed by Chad Stahelski, Chapter 3 skillfully spreads two hours and 10 minutes of choreographed violence across the screen, continuing the series' bow at the altar of Hong Kong action where this kind of filmmaking first made its bones.

The screenplay for Chapter 3 isn't likely to wow anyone with either subtlety or plot. It provides a serviceable clothesline on which the film hangs its bloody accomplishments, all executed with obvious aplomb.

The point of movies such as this is to serve up the kind of massive violence that makes audiences laugh at the sheer audacity of the achievement -- and also wince on those occasions when things get particularly macabre: a sword through the gut, a knife slammed directly into a skull or a head cracked open with a blunt force blow applied to a library book that has been shoved into someone's mouth.

I mean all this as praise for the stab-kick-shoot-and-run brand of cinema that the John Wick movies have been selling since the original debuted in 2014. You have to give a bit of twisted credit to a movie that manages to work horses into the action while teaching an important lesson: Never stand behind a large animal that's capable of kicking you to next county.

All you need to know about the story is that Wick has gotten himself crosswise with the High Table, an organization that governs the world's assassins. He begins the movie with a $14-million bounty on his head. So, he runs, fights, gets bloodied and does his best to survive. The formula remains clear: Wick's survival requires the deaths of many others.

The movie sprinkles all this with a variety of characters designed either to help Wick or to kill him. Halle Berre shows up as Sofia, an assassin with two attack dogs that have been trained to latch onto an assailant's crotch. Anjelica Huston plays a ballet director who also runs a Russian mob operation. No judgment. Lots of people in the arts have to find ways to supplement their income. Mark Dacascos portrays Zero, a fighter who wants to bring Wick down even though he admires his prowess.

Some of the regulars show up, as well. These include Winston (Ian McShane), as the manager of the Continental Hotel and Lance Reddick, as the hotel's concierge. The Continental, you'll recall, is a safe zone where assassins can recharge their batteries without fear of being killed.< I doubt whether aspiring actors are going to be studying Reeve’s line readings and there’s no question that Chapter 3 overdoes its brutal thing. By the picture’s late going, I began to become — if not bored —- a bit indifferent to all the mayhem.

It's also worth noting that for all its action, Chapter 3 qualifies as something of a place holder, setting up the next movie which promises to be an even greater ass-kicker than this one. Maybe that movie will be called John Wick: Chapter 4 -- He Kills Everyone.