Godzilla stomps through a chaotic movie

A surfeit of creatures can't make King of the Monsters into something to care about.. 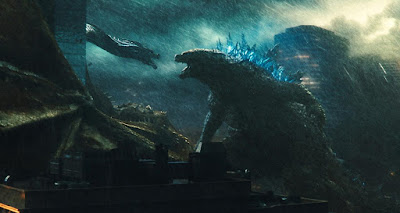 Loud, chaotic and repetitive, Godzilla: King of the Monsters suffers from a script that puts three creatures into a monster traffic jam that jars any hope of coherent storytelling off its moorings.

The monsters, in no special order, are Mothra, Godan, and Godzilla. As it turns out, these titans (as they're referred to in the movie) offer the last hope for saving the Earth, which has been ravaged by humans. But before the monsters can launch their world-saving, environmentalist mission, another monster must be vanquished, a three-headed dragon called Ghidorah.

The humans in the movies take sides -- sort of. One side -- led by Mark Russell (Kyle Chandler), a father who sank into dereliction after the death of his son in the previous installment, wants to kill the monsters. The other side is led by Dr. Emma Russell (Vera Farmiga), Mark's ex-wife. She wants to employ the monsters to save a world in which humans teeter on the edge of extinction.

To achieve her goal, Emma has thrown in with Jonah Alan (Charles Dance), a military man who has become an eco-terrorist; he's willing to pay a large price to save the world.

Madison Russell (Mille Bobby Brown), daughter of Mark and Emma, vacillates between the two approaches, as the movie bounces off one destructive set piece after another, none of them benefiting from anything resembling a well-staged buildup.

Other actors include Ken Watanabe, Sally Hawkins, Thomas Middleditch and David Straitharn, all of whom are swallowed -- not by monsters -- but by a screenplay that seems to have been eaten by the monsters, spit out as indigestible and then reassembled in ways that allow for dialogue that might have been fun had anyone bothered to deliver it with anything resembling a campy spirit.

As a result, Godzilla: King of the Monsters amounts to a collection of entirely forgettable performances.

The movie's big brain lodges in Farmiga's character: Dr. Russell is working on ORCA, a tacky looking electronic gizmo that can be used to communicate with the monsters by employing sonar or some such. If she's able to find the correct frequency she can calm the monsters, soothing their fire-breathing spirits.

The movie's high points all involve the mammoth creatures. The birth of Mothra, for example, reveals her glowing, elegant wings. Say what you will about Rodan, he knows how to make an entrance: He blasts out of a volcano.

Impressive in size, Godzilla doesn't have a particularly expressive countenance, and Ghidorah's three heads might productively have spent time talking to one another. Maybe they could have brought some much-needed coherence to a project that loads up on action involving battling monsters. These fights, splayed across ravished urban landscapes, aren't especially distinguished, but they're really all this Michael Dougherty-directed movie has to offer.

For some, that may be enough. Warner Brothers has more of these monster mashes on the way. Maybe next time, they'll add some things that this one seems to lack, human characters about whom we might actually care and action that raises the pulse instead of drubbing us into indifference. Look, they're fighting again. Sigh.