Time travel with a difference

See You Yesterday has a great main character and a pleasing home-grown feel. 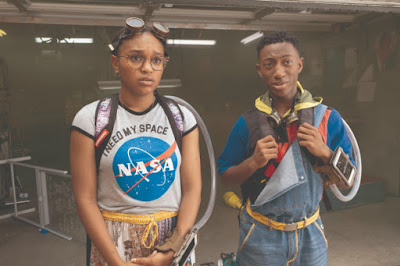 The new movie See You Yesterday mixes sci-fi (time travel) and social anxieties in ways that are fresh and ultimately telling. Director Stefon Bristol gives a down-home spin to an implausible premise when Claudette and Sebastian invent backpacks that will enable them to travel backward in time — albeit only for 10 minutes of the previous day.

Before Claudette and Sebastian embark on one of their brief journeys, Claudette's brother (Brian Bradley, a.k.a., Astro) is killed by an overeager cop. Claudette wants to return to the scene of the incident that cost her innocent brother his life. Can she save him and restore order to her disrupted world?

A simple premise is enriched by the screenplay's smart observations about kids, responsibility and the thorny issues involved in trying to come to grips with inconsolable pain.

These bright black kids (in itself a worthy addition to the screen) never are separated from the world in which they live. They may be book smart but they’re hardly naive about the neighborhood they inhabit, a part of the city where solid family life can be juxtaposed with street encounters that easily can go bad.

Wisely, it stays close to its two main characters and, in the end, has more to say about how young people deal with injustice than about what it means to crack open the space-time continuum.

Put another way, this helping of sci-fi is bathed in the persistent intelligence of its main character, a commanding teenager with more on her mind than finding the next big party.

Nicely assembled and fleet at 86 minutes in length, See You Yesterday avoids the pre-packaged feel of a high-concept product that has been rolled off a studio assembly line. It's a home-grown kick.