An abundance of images, a shortage of plot 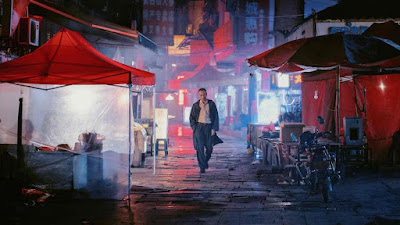 The title may be the same, but there's nothing about director Bi Gan’s film that resembles Eugene O'Neill's famous play. I’ve read that the Mandarin title for Bi's Long Day's Journey Into Night translates as Last Evenings on Earth, which is altogether more fitting for a drifting, art-drenched spectacle that offers whispered hints of a plots — or perhaps several plots.

Long Day’s Journey spends much of its two hours and 18 minutes meditating on dreams, memory, and movies. When I say meditating, I don't mean that the movie delves deeply into these topics, but that it instead tries to find cinematic equivalents for two of them; i.e., dreams and memory.

Ostensibly, the movie is about a man (Huang Jue) who returns to his home city in an effort to locate a mysterious woman (Tang Wei). During his trip, we learn about the man's friendship with a childhood buddy (Li Hongqi) who went to prison, and about his separation from his mother as a boy.

But mostly -- at least in my view -- Bi’s movie is about showcasing its imagery (there's plenty on display) with bows to Wong Kar-wai, the late Andrei Tarkovsky and other directors who can seem more interested in cinematic expression than in conventional storytelling.

If you see, Long Day's Journey as an extended mood piece with a noir spirit, you won't be far off, although you also may be able to say that the movie qualifies as an exploration of what transpires before the character at its center (he also delivers the movie's somewhat cryptic narration) finds his fleeting moment of love.

Bi employs lots of dreamy images (the glow of red neon on wet pavement, for example) and even includes a lengthy (60 minute) second half sequence that unfolds in a single take that will make you wonder how some of it was accomplished. Oh, I forgot to mention, that long take is presented in 3D.

I didn't see the movie that way, but even without 3D glasses, it's clear that Bi is interested in spatial depth as much as he's interested in developing characters.

Dream-like cinema always presents a challenge, and Bi’s is no exception. Watching Long Day's Journey sometimes feels as if you’re wandering through someone else's dream, floating through a world composed of memories and sensations that aren't your own. You sense the images have some kind of personal meaning, but it often proves elusive.

This can be frustrating and for the unsuspecting, Bi’s movie may prompt early searches for an exit. Talent and atmosphere are present in abundance, but I'd have to see at least one more movie before I'm willing to proclaim Bi a true visionary; i.e., not only a master of imagery but also a director with enough thematic reach to elevate his artistry into more meaningful realms.

It rains a lot during this long day's journey into night and many cigarettes are lit and smoked. If you insisted that I tell you what the movie is about I'd be tempted to say, water and chain smoking. So have it, your eyes will be rewarded even as your head is being scratched.