The awful insanity of the race game 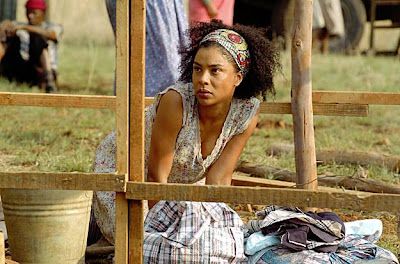 Sophie Okonedo as a woman grappling with apartheid.

Some stories are so interesting they demand that someone try to tell them. That's certainly the case with the life of Sandra Laing, a South African woman who was born to white parents during apartheid, but was treated as "colored," the now discarded South African designation for people of mixed race.

This particular bit of apartheid madness evidently resulted from the fact that one or both of Laing's parents had some black blood in their backgrounds -- and of course from blatant racism and stupidity. (During apartheid days, South Africa officially categorized people according to skin color.)

Both in and out of South Africa, skin color determines much about social interaction, but in the crucible of bigotry that became the basis for South Africa's apartheid laws, Sandra Laing's life was turned upside down. The madness of apartheid forced Laing to face questions of identity and eventually to come to grips with the racism of the white society to which she thought she belonged.

Sandra -- who had some black features -- couldn't live the life of a white Afrikaner. She was ostracized from white schools and ultimately rejected by her own father.

The story begins with Sandra at age 10, played by young Ella Ramangwane. Sandra's parents (Sam Neill and Alice Krige) are rural shopkeepers who have kept their daughter reasonably isolated, part of their strategy for avoiding trouble. As a result of her early upbringing, Sandra regarded herself as white, a perception that's challenged when she encounters bigotry and cruelty at a white boarding school.

Neill's Abraham Laing eventually begins a complicated legal battle to have Sandra declared white. The case goes all the way to South Africa's Supreme Court. Abraham isn't rejecting apartheid or racism; he wants his daughter to enjoy the privileges he believes are rightfully hers as an Afrikaner.

Abraham fails to realize that the legal decision won't much matter. For most Afrikaners, Sandra's skin color trumped legal rulings: Sandra remained "colored" in the eyes of her fellow citizens. When Sandra begins to accept herself as "black," she inevitably alienates her father. Abraham is particularly appalled when Sandra starts a relationship with a black South African (Tony Kgoroge).

Fabian tries not to paint a portrait in which the lines are too clearly drawn. At times, Sandra's parents act out of what they perceive as the best of intentions. Initially, her older brother tries to be protective. Her mother is torn between love for her daughter and the demands of a staunch, unforgiving husband.

Skin reveals the persistent insanity of the race game. Race can divide not only whole peoples but individuals within a single family. Sandra, of course, is one person with one story. But her life stands as a reminder of the pernicious effects of racism: The happy girl we meet in the movie's early scenes should have been able to pursue, with no more than ordinary effort, a happy life as an adult. Sandra lived in a society that denied her that right.

That was not only Sandra's tragedy, but her country's, as well. Skin opens in Denver Jan. 22

Posted by Robert Denerstein at 7:30 PM