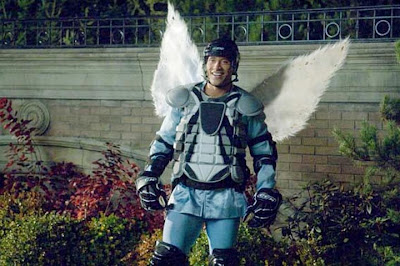 Perhaps there should be laws against this kind of display.

Among the many movie sights I'd hoped never to see, Dwayne "The Rock" Johnson in a tutu probably tops my list. I hadn't known how much I didn't want to see The Rock in a tutu until the screening of The Tooth Fairy, a family-oriented comedy that places too many of its comic eggs in one basket: Lame sight gags in which the buffed-up Johnson dons a variety of fairy outfits.

Johnson plays Derek Thompson, a minor league hockey player known as The Tooth Fairy; he acquired this very un-hockeyesque nickname because he enjoys knocking the teeth out of the mouths of opposing players. When he's not creating business for dentists, Thompson spends time with his girlfriend (Ashley Judd) and her two kids: Destiny Whitlock (the cute one) and Chase Ellison (the recalcitrant one).

Here's the thing: Thompson considers himself a hard-bitten realist. He doesn't believe in encouraging kids to follow their dreams. Derek's on the verge of telling cute little Whitlock that there's no tooth fairy, when Judd stops him in mid-sentence. Thompson's punishment for this heartless transgression: He's summoned to fairyland and told by his case worker (British comic Stephen Merchant) that he must serve two weeks as a tooth fairy. He tries to talk the head of fairyland (Julie Andrews) out of his sentence, but she's adamant.

So Thompson, who sprouts wings when he does fairy duty, begins receiving cell phone calls summoning him to his tooth fairy duties, usually at awkward or inconvenient moments.

Billy Crystal, who like Andrews has seen better days in better movies, appears as a fairyland version of the Q character in the Bond movies. He's the guy who dispenses the tools of the fairy trade. These include a spray that makes tooth fairies invisible and a paste that shrinks them to clothespin size. These gimmicks prompt a variety of predictable comic set pieces.

So long as we're on the subject of teeth, it should be noted that Johnson has a nice set of choppers. He tries to use to them as much as possible. OK, so the guy has a nice smile, but his biceps seem to be bigger than his repertoire of comic tricks.

Andrews leaves fairyland unscathed, but The Tooth Fairy, which sets out to defend dreams, misses even as feel-good comedy fluff. I suppose the whole business is good-natured enough, but funny would have been nice, too.

Posted by Robert Denerstein at 3:15 PM