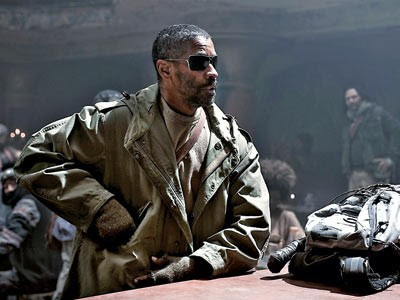 Denzel Washington is Eli, a man on a mission.


If you're a moviegoing regular, you've seen the world end so many times that you've probably learned to take post-apocalyptic devastation in stride. In the last several months alone, we've had 2012 (an attempt at a mainstream apocalypse) and The Road (a serious look at a fragile fight for survival). Now comes The Book of Eli, perhaps the wackiest post-apocalyptic movie yet. Starring Denzel Washington and directed by Allen and Albert Hughes, The Book of Eli carries eclecticism to its wildest extreme.

Ludicrous and gripping by turns, The Book of Eli can be described as a spaghetti western, a samurai movie, a sci-fi fantasy and a slice of religious inspiration, providing you like you're religious inspiration served with a razor-sharp machete. Washington plays a kick-ass survivor of a nuclear blast.

Washington's Eli is the proverbial man with a mission. He possesses the last remaining copy of the King James Bible. One day, a voice inside his head tells him to head west. He does, which means the man with the Good Book must confront a whole lot of bad people en route to the Pacific.

The Hughes brothers (Menace II Society, Dead Presidents and American Pimp) haven't made a feature since 2001's From Hell. Here, they shoot with desaturated colors and lots of CGI-boosted desolation. The movie takes place after something called "the flash,'' presumably a nuclear blast that took out most of the world. Some survivors were left maimed, others were blinded and many turned ruthless.

In this kind of unhinged world, mercy is short supply. So we regard it as a generally good thing that Washington's Eli wields a mean machete, and knows how to use the small arsenal of firearms he carries. But he's clearly a man who kills only when there's no other alternative.

Eli performs miraculous feats of survival -- mostly killing groups of adversaries who severely outnumber him. How does he do this? I think it's because he has divine protection. Watching Eli at work, you more or less believe he has some form of preternatural help. That's probably the only explanation for the surprise twist that marks the movie's ending.

In this depleted world, the Bible has taken on new importance. Eli wants to get the book into the hands of people who need it, the generation that has been born since the apocalypse. They don't know about human history and have no knowledge of the saving power of the word. Not surprisingly, Eli's path is paved with human obstacles, the most formidable being a dictatorial thug named Carnegie (Gary Oldman).

Carnegie, the vicious boss of a ravaged survivor town, has other ideas for the Bible. Like Eli, Carnegie remembers the "before time." He wants to use the Bible to control the rude and scoffing multitudes he currently brutalizes. This central conceit isn't quite as potent as the Hughes brothers may have hoped, but it serves to keep the movie moving over what seems an endless expanse of parched, devastated landscapes.

The movie's structure is relatively simple: Eli establishes his violent prowess; he arrives in Carnegie's town and then flees with Carnegie in hot pursuit. Reluctantly, he accepts a traveling companion, a young woman named Solara (Mila Kunis). She's fleeing Carnegie at the suggestion of her mother (Jennifer Beals), Carnegie's much-abused mistress.

The movie's violent set pieces are interrupted by a loony interlude in which Eli and Solara take refuge with an older couple (Michael Gambon and Frances de la Tour) who live in a rundown house in the middle of nowhere. They occasionally amuse themselves by listening to Anita Ward's disco hit, Ring My Bell. They may have resorted to cannibalism. The Hughes brothers present this bit of insanity as comic relief, but its effect is short-lived. Carnegie and his men show up and continue their ultra-violent pursuit of the Bible.

A graying Washington convincingly portrays a violent man who's also capable of great humility. It's not easy to play a character who does much and says little, and Washington certainly is up to the task.

Now whether the Lord would speak to a man who must use a machete to carry out his mission is a question the movie mostly avoids. But the Hughes brothers' single-minded direction matches Eli's single-minded sense of purpose as Book of Eli marches toward a finale that evokes Ray Bradbury and raises the kind of questions that could make the movie evaporate upon reflection.

Although a book serves to drive the plot, Ely seldom seems as if it was meant for people who spend most of their time reading. Eli wants to save the Word, but the movie's at its best when Eli does what he does best: He showers trouble on those who insist on opposing him --always with maximum efficiency. Eli may be a lean, mean, fighting machine, but the Lord is with him.

To which I say, "Amen, and pass the popcorn."

Posted by Robert Denerstein at 10:00 PM