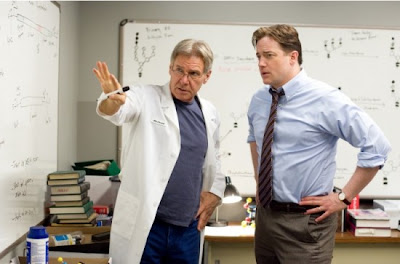 Judging by his movies, there are at least two Brendan Frasers: The first is a goofy George of Jungle sort of guy or maybe a Mummy kind of hero, an actor who stars in unabashed popcorn movies that sometimes create sequels and often generate megabucks at the box office.

Then, there's the other Fraser, the guy who acts in serious movies such as The Quiet American or Gods and Monsters. In the new movie, Extraordinary Measures, Fraser tips toward the serious side of his spectrum, playing John Crowley, a father and businessman who worked tirelessly to discover a drug that would save his children from the ravages of Pompe disease. (Pompe is a rare neuromuscular disorder that prior to Crowley's efforts almost always had proved fatal in children.)

The movie, which teams the 41-year-old Fraser with Harrison Ford, opens Jan. 22, and is based on a book by journalist Geeta Anand. Anand's The Cure told the story of how Crowley founded a company and sold it to a larger company, but never abandoned his goal: To find a drug that would save the lives of two of his children. At the time of diagnosis, Megan was 15-months-old and Patrick was five-months-old.

Q. How did you approach playing a real person?

A. I saw the screenplay that was developed from the story in the book. It impressed me. Look, I’m the father of three: a seven, a five and a three year old. Their bodies perfectly healthy, but the thought that something could go wrong ...

It’s my job to embody the spirit of John Crowley rather than put quotation marks around who he is as an individual. I met with the producers and talked about it. I met with Harrison. (Ford also served as the movie's executive producer.) I read some pages for Harrison. He said, ‘I hope this works out.’ I got the job.

A. We talked on the phone a couple of times. I watched a lot of interviews he had done on various morning shows; his story absolutely is newsworthy.

Q. The interesting thing to me about Crowley is that he had to play many roles: He was a father, a businessman and, also a diplomat. It took a lot of tact and restraint on Crowley's part to work with scientists and business guys who sometimes were coming from different places than he was.

A. Absolutely. The experience he confronted is a bit like David and Goliath, except he had to go to Goliath and say, ‘Hey, can we talk?’ And Goliath listened. There’s a scene in which John and Dr. Stonehill (Ford's character) are in dire need of funding, otherwise they’ll lose the whole line of research they’ve been toiling on for months. They both need to swallow any bile they may have for what they’re about to do (sell their company to a larger outfit to ensure a new infusion of capital)...

Q. And there are tough economic questions that Crowley had to deal with. Businesses don't always operate on humanitarian motivations. A. What is acceptable loss? What is the bottom line? What, in terms of dollars and cents, is the worth of a human life for a so-called ‘orphan drug,' a drug that’s not very popular because the disease is so rare.

Q. Harrison Ford, at least on screen, can be imposing. What was it like working with him?

A. Well, he screamed in my face. I screamed back. (Confrontational scenes between their two characters.) It's just a movie and then the day’s work is over, and you try to find some place to get dinner. He’s a good guy. He’s a highly researched actor. There isn’t a false note with this guy. All the science had to be right, not just gobbledygook. Everything that’s written on the chalkboards you see in the movie is accurate. That was very important to him.

Q. So, what about the schizophrenic nature of your career -- from silliness to sober drama? How do you strike a balance?

A. If I had an easy an answer, I’d give it to you. The brief answer is that I really like to work. I don’t know an actor who doesn’t. That’s why Harrison found this interesting material and executive produced it; he was looking for a way to find characters to play. Harrison's character is a composite of four or five people. He provides a counterpoint in the story. The two of them (Stonehill and Crowley) are heading in the same direction, but they don’t see eye-to-eye all the time, which is interesting from a screenwriter’s point of view, from a dramatic point of view. Q. Such is the nature of translating a real story for the screen? A. Sure. This is a film; it’s inspired by a true story, but that doesn’t mean that it isn’t entertaining.