Evil: It, too, takes a village 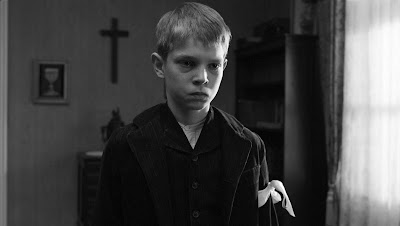 The white ribbon is meant to keep the boy pure.


Director Michael Haneke -- never one to dabble in nostalgia or romanticism -- uses a village setting in pre-World War I Germany as a laboratory in which his characters are tested, and almost always fall short. Haneke jettisons the fondness and affection that some artists bring to such retrospective endeavors, replacing them with something akin to cinematic Calvinism -- only with no hope of salvation to temper the pervasive sense of sin.

World War I, we're forced to conclude, didn't bring an end to global innocence, as is sometimes argued. How could it? There was no innocence to begin with.

In The White Ribbon, the festering brutalities of rural life become palpable and the feeling of oppression can be close to unbearable. Haneke's movie is narrated by the town's only teacher (Christian Friedel) who's speaking from the vantage point of his old age. He's looking back on his life as a young man, and if his memory is good, it wasn't a pretty time. (The voice of the older teacher belongs to Ernst Jacobi.)

Early on, the narrator tells us that his recollections may explain something about later events. Because the movie is set in Germany, it's impossible not to think that these "later events" have something to do with Germany's turn toward Nazism, which raised brutality from an individual trait to a national destiny.


If the movie does explain history, it's probably because Haneke shows us the delusions that keep these characters in a perpetual state of denial. Despite obvious violence, child abuse, sexual repression, feudal cruelty and religious hypocrisy, the townsfolk seem unaware of how their behavior might appear to an outsider. The thick fog of repression that characterizes their lives seems to have been normalized.

No one is spared the harsh light of Haneke's penetrating gaze. Not the town doctor (Rainer Bock), who probably represents rationalism or the town pastor (Burghart Klaussner), who clearly embodies religious repression.

Played with calm severity by Klaussner, the pastor tells his children that he's trying to keep them on a straight-and-narrow path as he applies a variety of abusive punishments. Surely these wayward savages understand that their father has no choice but to mete out punishment. It's the-suffer-now-to-avoid-suffering-in-the-hereafter approach to religion, and there doesn't seem to be a drop of solace in it.

Those familiar with Haneke's previous work (movies such as Funny Games and Cache) know that he's not afraid to dramatize wanton forms of cruelty and that he insists on depriving his audience of anything as satisfying as narrative closure. The movie raises questions about who might be performing a series of malicious acts that plague the town, and becomes all the more horrifying by not providing definitive answers.

A series of violent incidents begin when someone stretches a wire across a village road, tripping the doctor's horse. The doctor's misfortune, which lands him in the hospital, is followed by a succession of additional horrors: the abuse of a child, the death of a farmer's wife and the burning of a barn.

For all that, the doctor presides over what might be the movie's most brutal scene. Having recently returned from his brief hospitalization, the doctor tells his assistant that he's done having sex with her. In rejecting this poor woman, the doctor unleashes one of the most astonishing expressions of contempt I've ever seen in a movie -- or anywhere else for that matter.

The movie's title, by the way, refers to the white ribbon that the pastor makes two of his children wear, a reminder that they always should strive for purity.

Glimmers of hope do emerge. The teacher falls in love with a young woman (Leonie Benesch) who's hired as nanny by the baron (Ulrich Tukur). Additional grace notes appear: the pastor's angelic youngest son nursing a sick bird back to health, for example. The baron's wife (Ursina Lardi) so detests this loveless world, she threatens to bolt.


Small moments of sanity aside, The White Ribbon has an austere quality that penetrates our defenses and leaves us feeling vulnerable to its cruelties. Arresting black-and-white images by cinematographer Christian Berger are almost perversely restrained, and Haneke misses few chances to lock us into an environment that's devoid of spiritual nourishment. There's no music. The movie's silences can be crushing. Footfalls on wooden floors sound eerie and alienating.

You get the idea. The White Ribbon is terrifically made, but Haneke's eye seldom finds pleasure in the physical world his wretched characters inhabit. Maybe that's why watching this strange and chastening movie -- clearly the work of a superior talent -- often feels like a form of penance.