Condoleezza Rice and the price of power 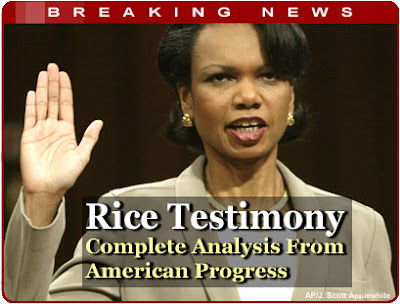 After the Bush crowd departed Washington, I thought that I might be able to get through the rest of life without ever having to spell Condoleezza again. But as with many hopes, that one has been dashed, this time by a documentary called American Faust: From Condi to Neo- Condi. As the title suggests, the movie operates within the parameters of a clearly defined thesis: Rice is portrayed as a brilliant woman who eventually sold her soul in order to enter the upper echelons of the U.S. power structure.

Using a variety of interviews to help make the case, director Sebastian Doggart shows both the promise and disappointment that define Rice's public life. American Faust probably emerges as another preach-to-the-choir helping of political cinema, but even if you reject the movie's argument, it certainly tells you plenty about the woman who once, in a slip of the tongue, started to refer to George W. Bush as her husband.

The movie begins with Rice's early life in Birmingham, Ala. She was there when four girls died in the church bombing of 1963. Four years later, Rice's family moved to Denver. Rice attended DU, where she was influenced by professor Josef Korbel, who also happened to be Madeleine Albright's father. Rice began her political life as a Democrat, but eventually strolled over to the neo-con corridors of power.

To me, the most interesting segment in American Faust doesn't involve politics, at least not directly. At one time, Rice dated Denver Bronco Rick Upchurch, who's interviewed in the film. Rice, a rabid football fan, and Upchurch were engaged, but Rice broke off the engagement to pursue an opportunity in the Carter Administration. She may have chosen Washington over love.

Doggart's movie suggests that Rice's many career moves had less to do with conviction than with her desire to find her way into the centers of power. But it wasn't until George W. Bush that she attained her greatest triumphs -- first as National Security Advisor and then as Secretary of State.

The film's experts slam Rice's performance as National Security Advisor and as Secretary of State, citing dereliction in her failure to give sufficient weight to intelligence reports that preceded 9/11 and variety of other lapses in competence and, some would argue, moral judgment.

Whether you buy Doggart's view or not, American Faust offers lots of provocative interviews, and Rice's career certainly merits evaluation. Those who disagree with Doggart should start their own cameras rolling. I'd love to hear the counter-argument. A little more of it might have made American Faust even stronger.

Posted by Robert Denerstein at 8:00 AM