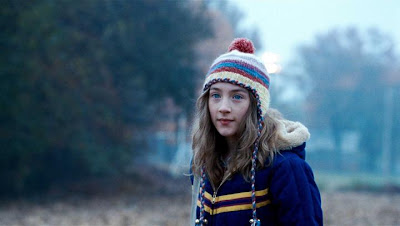 
The Lovely Bones director Peter Jackson's long-awaited adaptation of Alice Sebold's well-received bestseller, provides an example of what happens when a movie overpowers its characters. A showcase for both realistic and fantasy filmmaking, The Lovely Bones tells the story of a murdered Pennsylvania teen-ager who narrates what happens to her family while she occupies a limbo between death and a presumably blissful heaven.

As such a story suggests, adapting Sebold's novel for the screen posed many challenges, not the least of which was depicting this in-between state. Famous for the Lord of the Rings trilogy, Jackson creates a limbo full of CGI wonders that are composed of familiar and frightening elements from the dead girl's world. A little of this goes a long way.

But Jackson, whose Heavenly Creatures dealt with two real-life teen-ager murders, is no slouch when it comes to macabre moments. When he's dealing with the serial killer, played with creepy intensity by a nearly unrecognizable Stanley Tucci, Jackson gives his movie an eerie, sickening undertow. Tucci's George Harvey lives on the same block as the girl he murders (Saoirse Ronan). He's a loner, the psycho next door.

Jackson obtains a wonderful performance from Ronan as 14-year-old murder victim Susie Salmon. Ronan -- last seen in Atonement -- embodies the poetry for which Jackson seems to be striving. Her delivery of the narration qualifies as truly lovely. As the movie requires, she can seem both spectral and real.

The movie's casting proves first-rate in other ways. Mark Wahlberg plays Susie's father, a man who painstakingly places miniature ships in bottles. He becomes obsessed with finding Susie's killer. Rachel Weisz portrays Susie's mom, and Rose McIver and Christian Ashdale appear as Susie's younger sister and brother. McIver is at the center of one of the movie's most riveting scenes: She searches Harvey's home, hoping he won't return before she's finished.

The rest of the cast includes Michael Imperioli as a detective who investigates Susie's murder and Susan Sarandon, as the grandmother of the Salmon family -- one of the few characters whose feet never leave the ground. Grandma smokes, drinks and makes a happy mess of things when she comes to stay with the family. A comic montage involving failed attempts at watering plants and doing laundry allows Sarandon to make a big impression with a small role.

Full of signs and symbols, The Lovely Bones seems to be about letting go. Susie must resolve feelings about her shortened life, and her family must come to grips with loss. This is a strong subject, but the movie treats it somewhat abstractly as it darts between Susie's limbo and the world she has left behind.

In a way, Jackson puts us in limbo along with Susie. His movie has a feeling of suspended time. We're in a moment (actually several years) when the world of the Salmon family is as unsettled as Susie's tender soul. This is a portrait of life before the return of stability, which may explain why nothing feels entirely solid.

The trouble with creating this kind of hypnotic mood -- something at which Jackson excels -- is that it can anesthetize us instead of waking us up. Despite flashes of real sadness, Lovely Bones remains as remote as the penguin inside the snow globe that fascinated Susie when she was younger.

The snow globe crops up at the beginning and end of the story, serving as a kind of inadvertent metaphor for the movie itself. Yes, Tucci is terrifying. And, yes, the in-between world can be something to behold. And, yes, there are moments of genuine poetry here. But it's as if everything takes place within Jackson's cinematic snow globe. There, nothing and no one seems entirely reachable.