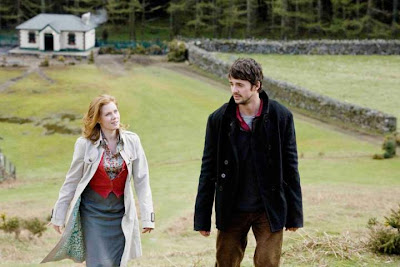 The movie Leap Year -- a forgettable comedy built around a series of unpromising contrivances -- did little for me other than tarnish my hopes for romantic comedy in the new decade.


An over-amped Amy Adams plays Anna, a busy working New Yorker with an addiction to high heels and her smart phone. As is supposed to be the case with many modern women, Anna wants it all. She has a career, but she's waiting patiently for her physician boyfriend (Adam Scott) to propose. He drags his feet, and heads off to Ireland on to attend a convention. Anna decides to follow. There, she'll be the one to propose, a ploy that's injected into the movie via a brief appearance from John Lithgow, who plays Anna's father.


That's step one. Step two involves travel complications that strand Anna in a small Irish town, where she eventually coerces the owner of the local inn (Matthew Goode) to drive her to Dublin to meet her boyfriend. Goode's Declan is a free spirit; Adams' Anna is a control freak. Once they take to the road, the movie sinks into a bog of cliches and bickering with a few supposedly colorful Irish characters dragged into the dispiriting fray.


There's no point wasting words on a movie this negligible, and it's best to avoid such corny admonitions as "You'd be wise to leap over 'Leap Year.'" (Sorry.)


So, I'll move on, crossing my fingers in hopes that the movie is just one more January throwaway and not a harbinger of future rom-com hells.