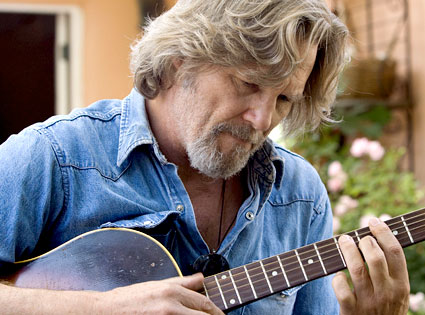 Jeff Bridges, healthier here than in most of Crazy Heart.

When journalists write about Jeff Bridges, they often insist on telling us that he's underrated. Maybe, but I can tell you I've never underrated him. Bridges is a terrific actor with a standout resume. Sure, there are signature performances -- the Dude in The Big Lebowski or Duane Jackson in The Last Picture Show -- but if you're not up to speed on Bridges, you should rent Fearless, The Fabulous Baker Boys and Cutter's Way. Those aren't the only wonderful Bridges' performances, but they're good places to start.

All this by way of saying, it's hardly a surprise that Bridges has received tons of praise for his performance as country singer Bad Blake in Crazy Heart. After a recent screening of Crazy Heart, someone mentioned that no one could play an alcoholic better than Bridges. I'm not sure that's true, but Bridges does something really interesting with his portrayal of the dissolute Bad Blake. He makes him likable. He also gives Blake an incipient sense of self-awareness, the knowledge that his path of self-destruction has left plenty of human rubble in its wake.

When a reporter (Maggie Gyllenhaal) asks Blake where his songs come from, he replies, "Life, unfortunately." Roll that one around in your mind for a bit; it pretty much tells the story.

Scott Cooper makes his directorial debut with this country/western slice of life, a movie that begins with Blake scraping his feet against the barrel's bottom. He's reduced to singing at bowling alleys, the kind of joints where the owner tells him he can't run a bar tab but can have all the free bowling he wants, a ridiculous offer to a guy who subsists on cigarettes and whiskey. Blake's ride -- a rust-red 1978 Chevy Suburban -- isn't much to look at, and he's drinking himself sick.

As the story develops, Scott fills in Blake's background. He has a 28-year-old son he hasn't seen in years. He's been married a bunch. He was once had a big career. He's a gifted songwriter who can't write anymore. Want to request one of the old tunes? It might help if you bring a bottle of whiskey.

The story forces Blake to come to grips with his alcoholic behavior. He starts an affair with Gyllenhaal's Jean Craddock, a single mom with a four-year-old son named Buddy (Jack Nation). Blake likes Buddy, and we know that this cute kid offers Blake a shot at redemption -- both as a man and as a father. And we also know that as long as he's drinking, Blake will find a way to screw things up.

Crazy Heart belong to Bridges, but a couple of performances add nice support. I was happily surprised by Colin Farrell, who plays Tommy Sweet, a singer who's at the top of his game. Tommy regards Blake as a mentor and respects his talent. Farrell's playing a star, but he doesn't fall into the expected cliches. His appreciation of Blake seems sincere.

Robert Duvall -- who played a country singer in the more restrained Tender Mercies -- also makes his presence felt. Duvall portrays a reformed alcoholic bartender, one of Blake's few real friends. It's great to see Duvall in a strong -- if small -- role.

Crazy Heart virtually brims with music; the songs are the work of Stephen Bruton and T-Bone Burnett, and they're all good. Look for The Weary Kind -- written by Burnett and Ryan Bingham -- to make a strong bid for this year's Oscar for best song. And although Blake sometimes derides the pick-up musicians with whom he's forced to play, the backup bands all know how to cook. Look, I'm not a big fan of country music, but I enjoyed it in the dusty-boots context of Crazy Heart.

Scott, who wrote the script based on a novel by Thomas Cobb, doesn't bring matters to the harshest possible conclusion, but he doesn't follow a happily-ever-after formula either. Blake can't get off the hook for all that he's done -- and he's done a lot. You can see it Bridge's face, in the hair that looks as if it hasn't been washed in weeks, in the half-hobbled walk and in the eyes that are beginning go hollow.

I'd say that in the 57-year-old Bad Blake, Bridges has found a role that fits his talents and may put him on Oscar's pedestal, but every knowledgeable film fan and critic already knows that Bridges should have been there years ago. Crazy Heart may just seal the deal.*

Nice review. Bridges is very underrated in my opinion.

From an admirer of Crazy Heart